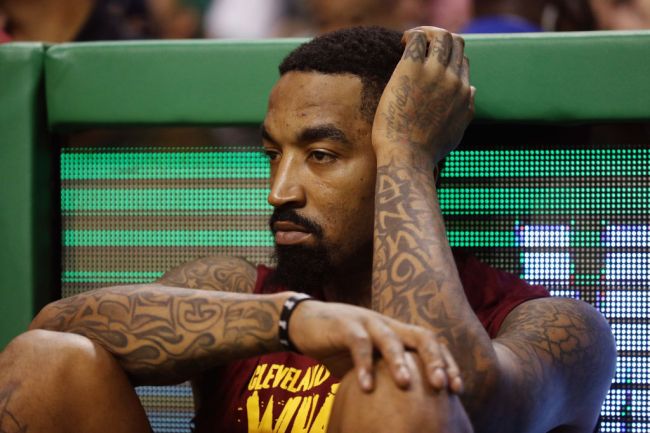 In April 2020, Smith admitted on a Bleacher Report livestream that he “hates” the taste of the French cognac, after telling the Knuckleheads podcast he’s only had three glasses of Hennessy in his life.

Smith claimed that the highly-circulated photo of him taking a bottle to the face in celebration of the Cavs 2016 Finals win wasn’t actually Hennessy, but champagne.

“The funny thing is the picture that everybody talks about with me drinking Henny, it’s a champagne bottle,” he said. “So, I don’t even know how that even came about.”

NBA Twitter did what it does, and The Hennessy narrative became a runaway train of memes, photoshops, and GIFs.

But now that the 35-year-old is enrolled at North Carolina A&T in pursuit of a liberal arts degree, Smith believes this noble endeavor should not be smeared with shallow insults.

In response to a viral clip of J.R. walking the hallways accompanied with the caption: ‘This man J.R. really go to my college. He probably off the henny right now,’ the two-time NBA champion took a shot at the House of Highlights account that helped amplify it.

Ight that Henny shit really not funny tho can ya’ll try a different joke! Not really mad at the kid they gone say whatever but @houseofhighlights the disrespect ya’ll post it’s truly enough. As a black man in America you still can’t move on from the bullshit that people continue to put on your name! Not one positive post about going to school and trying to myself! Ya’ll make it look so weak/corney to inspire people to want to do better you consistently bring up an post bullshit.

I’m excited @TheRealJRSmith goes to #NCAT but y’all need to realize he is a person trying to better himself. Give him his space and privacy. Network with him and engage in intellectual and meaningful conversation. Proud of you J.R., do your thing. #AggiePride 💙💛💯 pic.twitter.com/z1SoSZb8aV

Smith has a point. The internet was way over its skis with the Henny jokes.

Lebron: JR, why the hell did you ran out the clock?

JR Smith: I used my Henny God powers, & went forward in time. to view alternate futures. To see all the possible outcomes of beating the Warriors. 14,000,605 possible outcomes, & this was the only way… pic.twitter.com/ZjwHObkhV2

JR Smith can pull up from Henny where! Amirite?!?! pic.twitter.com/LSkipamodX

I’m perfectly fine with rebranding J.R. Smith as an academic and a collegiate golfer. You should be too.