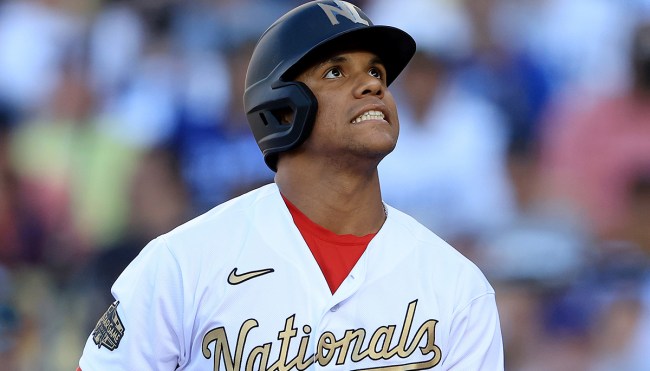 It didn’t take long for Juan Soto to establish himself as one of the most electric players in baseball after he made his grand debut with the Washington Nationals in 2018.

He may have narrowly missed out on Rookie of the Year honors that season, but when he kicked off his fifth campaign this spring, he’d already managed to add a couple of Silver Sluggers, a batting title, and a World Series to a résumé that was only poised to get more impressive as the historically talented 23-year-old continues to improve.

Soto earned a second All-Star Game selection prior to the festivities this week (where he also walked away as the winner of the Home Run Derby). However, he also made plenty of headlines in the days leading up to those events when he turned down a contract offer from the Nationals that would’ve been worth $440 million over 15 years (he previously rejected a $350 million, 13-year extension during the offseason).

There’s been plenty of speculation Soto could be dealt to another team prior to the trade deadline on August 2nd, and now, we’ve gotten another sign all may not be well in Washington based on what his agent Scott Boras had to say about the travel arrangements (or lack thereof) the franchise provided to its lone representative at Dodger Stadium.

Boras aired some grievances on behalf of his client while speaking with Sports Illustrated, saying:

“The Atlanta Braves arrived [in Los Angeles] five hours earlier than Juan Soto did. You know why? Because their team chartered a plane.

Juan Soto had to fly on a commercial flight and wait in an airport for two hours and get here at 1:30 in the morning and have to compete in the Home Run Derby.

This may be the very definition of a Rich Person Problem (and an issue Soto apparently had no problem overcoming based on his performance on Monda night), but relationships between teams and players have previously deteriorated over lesser matters.

As a result, the next couple of weeks could be very interesting.