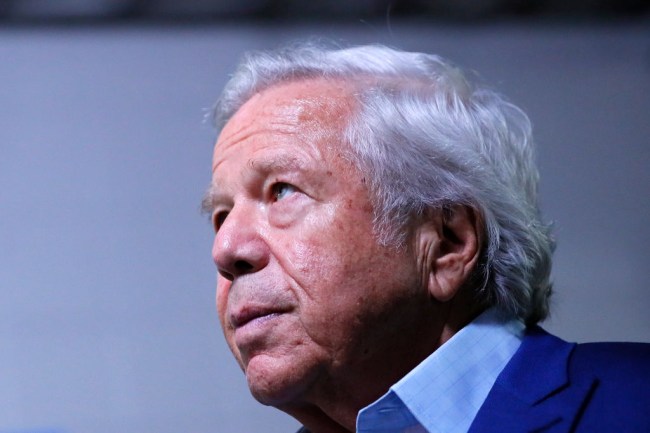 Over the course of my time on the internet, I’ve clicked play on a number of videos only to almost immediately regret the decision while simultaneously being unable to resist the urge to look away, and thanks to my morbid curiosity, there are certain images seared in my brain that will never go away.

I’ve seen two girls harness one cup in a way that nobody ever should, watched a party that promised lemons but featured nary a fruit in sight, and viewed a flatulent woman doing things to an innocent cake that didn’t deserve the fate it suffered.

As a result, I wasn’t exactly thrilled when prosecutors recently announced they were planning to release a video of Robert Kraft (allegedly) engaging in some illicit activities at a massage parlor in Florida after the New England Patriots owner was busted in a prostitution sting back in February.

I wasn’t the only one.

While I know there’s no way the video in question will be as explicit as the ones I referenced above, it still supposedly features a 77-year-old man engaging in some sexual hijinks, and if I’ve learned anything during my online travels, there are some things you simply can’t unsee.

After being made aware of the video’s existence, a number of publications did everything they could to get their hands on the footage, which is allegedly being shopped around to various outlets.

Last week, Kraft’s legal team started to push back against the state but were unable to persuade the prosecution, which said the public had every right to see the surveillance video captured inside Orchids of Asia Day Spa.

However, according to TMZ, a Florida judge has taken Kraft’s side and blocked the release of the video, saying it would jeopardize his right to a fair trial.

However, he didn’t rule out its eventual release and said it could be made available to the public if Kraft accepts a plea deal or the case goes to trial (TMZ also reports it can come out if prosecutors decide to drop the charges, which doesn’t seem entirely fair).

In the meanwhile, you’ll have plenty of time to prepare your eyes for what they’re about to see.