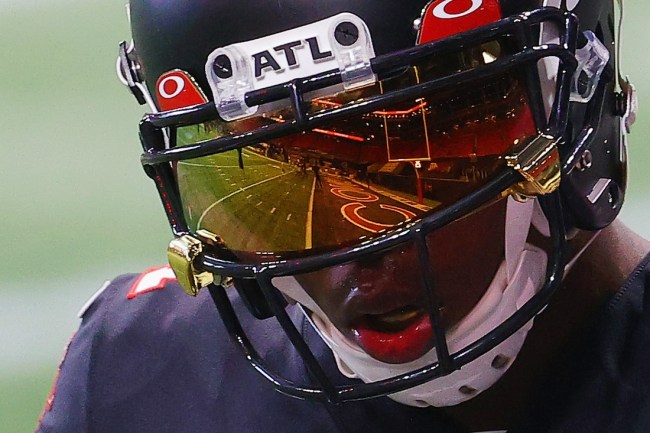 It took awhile for Julio Jones to be traded from the Atlanta Falcons, but, ultimately, the Tennessee Titans stepped up to the plate and finalized a deal for the 32-year-old wideout. It wasn’t without a lot of back and forth, however, with Jones’ name being floated around all NFL offseason without much of a sniff of serious interest, as many teams appeared to undervalue the player, per reports.

Now that Jones is on the Titans, there’s a lot of enthusiasm about what the AFC South team can do next season. Already loaded with young talent at receiver thanks to A.J. Brown, Tennessee now has two receivers who can embarrass defenses. Add in All-Pro running back Derrick Henry — who should see less 8-man boxes with the addition of Jones — and Titans fans like the one and only Douglas Charles are salivating at what could develop offensively.

But prior to the Titans going out and acquiring Julio Jones this NFL offseason, there was one thing the team’s head coach, Mike Vrabel, felt necessary to do: Consult the player’s former college coach, Nick Saban.

Although the price tag for Jones wasn’t a king’s ransom — only costing Tennessee a 2022 2nd round pick and a 4th rounder in the 2023 NFL Draft — Vrabel still wanted to make sure that Saban approved of Jones as both a player and person prior to doing a deal with Atlanta. Naturally, the iconic Alabama head coach spoke highly of his former superstar wideout.

“I have a really good relationship with Coach Saban,” Vrabel said. “He’s welcomed me here to, really, just try to get better and improve as a football coach. And then the ability to call him and ask him about the situation about adding a player that he coached was something that I was able to do. …Coach Saban obviously thinks a great deal about Julio as a person.”

Mike Vrabel on his relationship with Nick Saban. Says he thinks a great deal of Julio Jones as a person pic.twitter.com/5vaC9XKNgo

I’m sure this type of stuff happens all the time, but is anyone else surprised it was Nick Saban who Vrabel reached out to first? Sure, it sounds like they have a relationship, but couldn’t the Titans head coach find someone who knows Julio Jones from the past couple of years and not someone who the receiver played for all the way back in 2008?

Also, what did Vrabel really think was going to happen during his call with Saban about Jones? There’s no way Bama’s head coach would dog the receiver — because, if that ever leaked, it’d be bad for his own business in Tuscaloosa. It just seems like the Titans head coach was looking for validation more than anything else; which he obviously got.

While some are skeptical about whether or not Jones will make a serious impact with the Titans next season, you can’t fault the organization for swinging for the fences by going out and acquiring a possible Hall of Famer this NFL offseason. Julio Jones might not be the player he was five years ago, but he’s still a game-changer if he’s healthy.