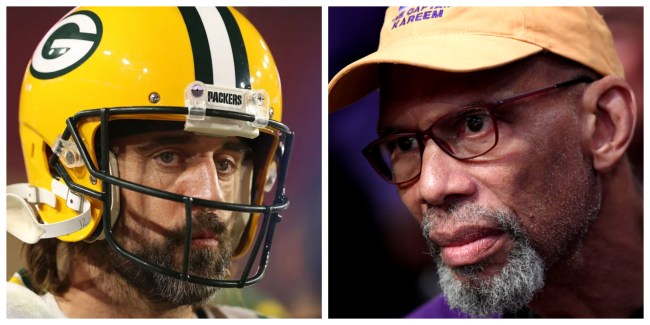 Aaron Rodgers hasn’t stirred the pot when it comes to being vaccinated or unvaccinated over the last week, he’s stuck an industrial-sized mixer into said pot and flipped the switch to high.

It all started when Rodgers tested positive last week, but that news swiftly took a backseat to the news that he had not been vaccinated. His status caught the sports world off guard given the fact that he told reporters he had been “immunized” this offseason.

From there, things continued to move quickly for Rodgers. With a large number of people, both fans and media members alike calling him a liar, the Packers QB joined ‘The Pat McAfee Show’ on Friday to share his truth.

The interview was a doozy with Rodgers talking about cancel culture, Joe Rogan, tossing in a Martin Luther King Jr. reference, flat-earth, and Donald Trump among many other things.

The interview is what has sent plenty of people over the edge when it comes to the entire situation at hand.

Terry Bradshaw ripped into Rodgers and called him a liar during Sunday’s FOX pregame show. Howard Stern has even gotten into the piling-on Rodgers game saying that the QB should be thrown out of the league for “what he did to his fellow teammates.”

It’s worth noting here that both the Packers and the NFL knew that Rodgers was unvaccinated.

Bradshaw and thousands of other people calling Rodgers a liar is one thing. Stern saying he should be kicked out of the league, even though he wholeheartedly knows there’s no chance in that happening, is another.

Kareem Abdul-Jabbar, on the other hand, may have made the boldest claim yet regarding the Rodgers controversy.

“If [Rodgers] ever requires open-heart surgery, will he hand the scalpel to romance writers because they know about matters of the heart?” Abdul-Jabbar wrote on Substack.

“What’s especially bothersome is that Aaron Rodgers didn’t just lie and threaten the health of those around him, he also damaged professional sports.”

Abdul-Jabbar also wrote that Rodgers’ “lies, his illogical defense, and his hubris damage all professional athletes.”

Abdul-Jabbar has been vocal with his pro-vaccine stance and very clearly didn’t appreciate Rodgers making the decision to not get vaccinated. Add the interview with McAfee where Rodgers endorsed things the mainstream media hates, and Abdul-Jabbar simply couldn’t hold back any longer.

Abdul-Jabbar’s theory that Rodgers “damaged professional sports” is based around his idea that anytime a professional athlete “does or says something stupid” the public loses trust in athletes and “sponsors might consider avoiding players in favor of actors, pop stars, or social media influencers.”

In summary, Abdul-Jabbar is upset with Rodgers, and perhaps other athletes, for possibly losing sponsors. I guess Troy Ave was right, it truly is all about the money.

While the two situations have nothing to do with each other, Abdul-Jabbar also found it fitting to compare Rodgers’ situation to that of Colin Kaepernick.

“I can’t help but think of Colin Kaepernick, who was blacklisted by the NFL for passively expressing his frustration with systemic racism – a brave act meant to help his community and save lives – while multi-millionaire Rodgers will continue to play, despite lying to the fans and his teammates and putting innocent lives in danger,” Abdul-Jabbar wrote.

Abdul-Jabbar didn’t expand any further on his thoughts that compare Kaepernick and Rodgers. He probably didn’t see a need to explain himself, he just fell into the habit of bringing Kaepernick’s name into the fold any time a separate controversy presents itself in professional sports, and Abdul-Jabbar certainly isn’t the only person that possesses that habit. Kareem feeling it is necessary to bring up Kaepernick in this situation is as inexplicable as Rodgers finding it fitting to bring MLK into his interview on Friday.

Rodgers’ punishment by the league will likely be equivalent to a slap on the wrist. He’s one of the greatest quarterbacks of all time, is the reigning league MVP, and earns the Packers and the NFL millions of dollars. Colin Kaepernick was a backup quarterback when he exited the league, a league he compares to slavery, while simultaneously working every day to get his second chance.

Comparing the two players and their separate situations is both lazy and asinine. On top of all that, if Rodgers not getting the jab and speaking his mind during an interview “damaged professional sports,” you could make the same argument that Kaepernick taking a knee and wearing pig cop socks damaged sports as well.