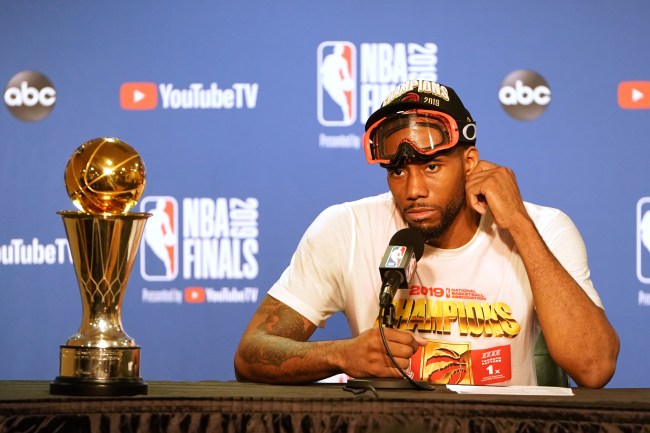 Kawhi Leonard’s free agency this summer is one of the hottest storylines in the NBA offseason. Fresh off of his second championship and NBA Finals MVP, Leonard is the premier player available on the market, with his decision likely changing the entire landscape of the league. At 27 years old, the guy is in his prime and, presumably, has another decade to prove why he’s among the game’s all-time greats.

While nobody knows for sure where Kawhi Leonard will end up, there have been lots of rumors linking him to a variety of teams. Considering he’s from Southern California, two of those teams are the Los Angeles Clippers and the L.A. Lakers, with the former actually being believed to have the stronger odds of landing the superstar. If Leonard does end up leaving the Toronto Raptors for the Clippers — a franchise with little history of success and compete with the iconic Lakers — current ESPN personality Jalen Rose thinks Kawhi will be making a big mistake.

While discussing Kawhi Leonard’s free agency and the possibility of landing in L.A., Rose seems to suggest that Leonard could be damaging his legacy by going to an organization without much fanfare. Here’s what the former NBA player had to say.

“I want to do a warning for him. The grass ain’t always greener, OK? He came to Toronto, and he has a nation behind him. A country behind him. The Clippers’ fans are few and far between in Los Angeles. Don’t get it twisted. That’s a Lakers town. That is a Lakers town, OK? They’ve got the 16 championships, they’ve got the storied players in their history, and the Clippers still play basketball in their building.

So now you’re still pulling up at work and all you’re seeing is great statues. There’s Magic, there’s West, Kobe’s going to be up, there’s Shaq. And then you walk into the arena, you look up, Laker jerseys. How many Clipper jerseys are hanging up? None.

You’re going to go from playing varsity in Toronto, where they just won a championship and Masai Ujiri delivered. The medical team delivered. They kept him healthy. He was 98th in the regular season in minutes. In the playoffs he was first. They managed Kawhi, the entire year. They won a championship without a lottery pick on the roster. That shows you that they know how to build.

You’re going to go to LA.. and they got LeBron? And they got Anthony Davis? Not going to be able to do it. Kawhi, stay in Toronto.”

Rose’s points are pretty valid. Considering the Lakers are always the star of Los Angeles, having Kawhi Leonard going to the “other team” in the city could prove to do more harm than good for him. Sure, Leonard isn’t necessarily one who boasts or talks much, if at all, but part of the reason L.A. has to be a possibility is because it, seemingly, opens up more opportunities off the court. That might not be the case if playing for the Clippers, though.

There have been rumblings that Kawhi may sign a short-term deal to stay with the Raptors, but who knows how this will all go down.