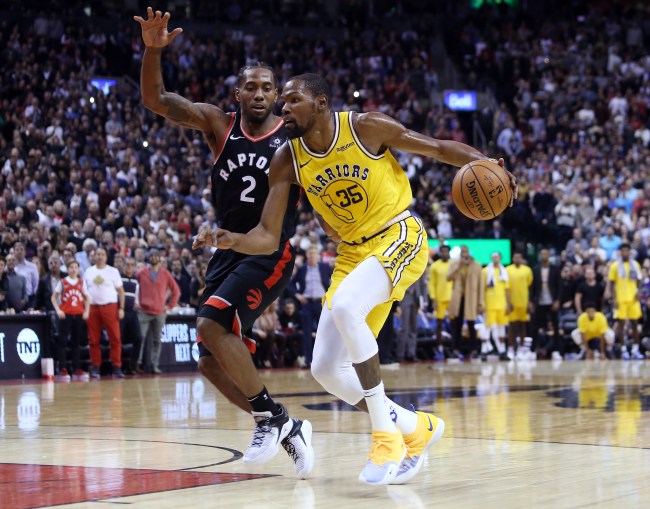 Kawhi Leonard and his Toronto Raptors fell just short in Game 5 of the NBA Finals, losing by one to the Golden State Warriors. While the series now shifts back to Oakland for a Game 6, the one glaring question that nobody will be asking now is simple: Will Kevin Durant be part of this series at all?

Ever since this matchup was decided a few weeks ago, Durant has been a looming figure in the shadows, with media and NBA fans wondering if he’d get to go toe-to-toe with Leonard, with two of the biggest superstars on the planet playing a key role in who would win. Although Durant did play in Game 5, it was only for 12 minutes, with him ultimately leaving with what’s believed to be an Achilles injury.

It’s a bummer for the entire NBA world, and one that deprives anyone watching the NBA Finals from witnessing a Kawhi Leonard-Kevin Durant showdown. But could the two be playing together once they both hit free agency this summer? There have been rumors out there that it could happen, with one report saying there’s a “better than 50 percent chance” each signs with the Los Angeles Clippers.

While the pairing would be lethal, there’s just one problem — Kawhi Leonard might not want to play with Kevin Durant. Why? Apparently, he’s still pissed about a 2014 tweet that KD sent, which referred to Leonard as a “system player” as a member of the San Antonio Spurs. The tweets have since been deleted, but someone dug them up from way back when to remind everyone how Durant felt about The Claw.

Apparently Kevin Durant isn't all that impressed with Kawhi Leonard. Tweets have since been deleted. #Thunder #OKC pic.twitter.com/2XJUQKj99l

Now, this might be old news that shouldn’t ruffle any feathers, but, apparently, it’s actually made Kawhi Leonard so upset that he would seriously refuse to team up with Kevin Durant in free agency this summer because of it. That’s according to ESPN’s Brian Windhorst from 2018, who had this to say about Leonard’s thoughts about teaming up with the Warriors star.

Very few people so certainly I’m not saying that this is some sort of insight that is dazzling but from what I understand, when Kawhi heard that quote that he was a system player that it really, really pissed him off and that’s one of the things that you carry with him so I don’t foresee Kawhi wanting to team up with Durant.

Man, seems like Kawhi Leonard isn’t afraid to hold a grudge, huh? The Raptors star might not say much, but it sure seems like he internalizes his feelings.

For his part, Kevin Durant did backtrack a little bit after his tweet in 2014, saying that he never called Kawhi a system player, and that everyone else was just making it to be a bigger deal than it needed to be. Classic KD, right?

I did not hate on Kawhi Leonard, quite honestly if you knew me or been around me, you would see how excited I was for such a young humble guy. But this world loves conflict I see. I really gave major props to coach pop and the whole staff for putting those guys in great positions to be successful. I’ve realized u can’t say anything about a champion so if I hurt anybody’s feeling I apologized(I really don’t) but u get my drift

WIth Durant now out for the rest of the NBA Finals, Kawhi Leonard hoping to lead his Raptors to a title and both being the most premier free agents in the league this summer, we’ll have to see if the two have (or can) put any beef behind them, because any team that presumably could land these two together would be lethal to deal with.