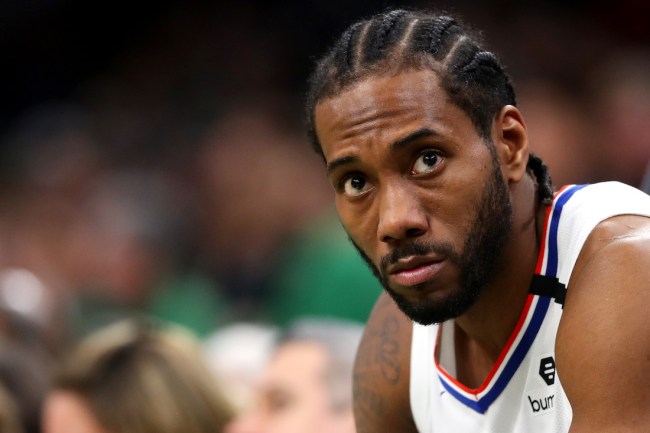 Kawhi Leonard is not here for your entertainment. Sure, the two-time NBA champ might technically be here for that, considering he’s paid millions of dollars each year to entertain fans with his basketball skills, but if you see the Los Angeles Clippers’ star out in public, he isn’t anybody’s puppet.

Some poor soul didn’t get that memo when he actually did cross paths with Leonard on the street recently. Naturally, because we’re all always on our cell phones, the dude tried to record this once-in-a-lifetime moment, hoping to turn it into a massive viral video that boosted his likes, his follows and made him known for being “that guy who made Kawhi Leonard act like a human.” The attempt failed miserably.

Instead of getting the moment he was hoping for, the guy got completely snubbed by Kawhi, with the Clippers star punking out the dude as he pleaded for Leonard to do his iconic laugh on the spot. Just look at the L the guy took when requesting the memorable chuckle from the hoops star.

You’ve really got to admire the guy’s persistence here, just doing everything he could to try and get Kawhi Leonard to break character and give the camera something, anything, worthwhile. Instead, the only thing the dude got was dismissed, with Leonard coming up with every possible reason to avoid doing that iconic laugh of his.

First, Leonard refuses to laugh because of… COVID?! Hilarious. That would’ve made me laugh had I been in the other guy’s position.

Then the NBA star wants the dude to tell a joke. Fair enough, that’s a reasonable request. It’s too bad the guy couldn’t think of anything funnier than, “I’m a bucket.” Nobody even knows what that means. You have one shot to make Kawhi Leonard laugh and that’s the best you have? Not some mindless knock-knock joke that you heard from your dad? Man, what a total fail. No wonder Kawhi simply kept walking and uttered, “not funny.” At least come with something better like, “I’m a fun guy” — at least that’s worked in the past.

For all those who ever get a chance to make Kawhi Leonard laugh, let this video serve as a reminder of what not to do. Sure, the Clippers star is (most likely) a robot who was put on earth to dominate fools on the basketball court, but if there’s ever a chance to make him show some personality, demanding he laugh and giving him a piss-poor attempt at a joke are two ways guaranteed not to make that happen.