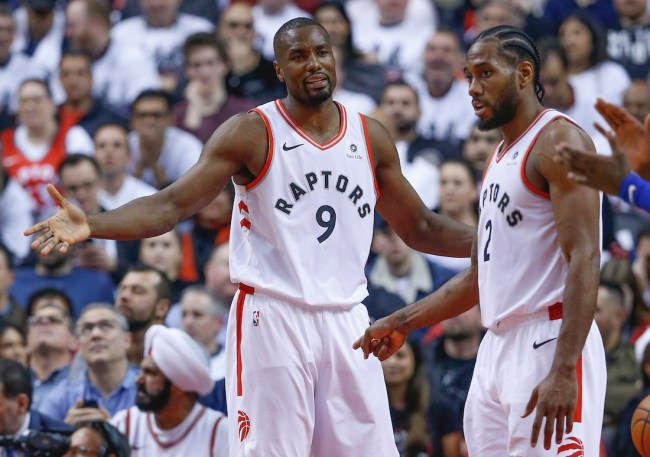 It’s no secret that Kawhi Leonard is… different. While the two-time NBA champ’s an absolute superstar in the league and one of the most lethal two-way players in recent memory, he’s about as socially awkward as an IT guy on a date with a supermodel. That’s not meant to be a total knock on Kawhi, but, man, while other stars like LeBron James and Giannis Antetokounmpo tend to show their personalities mores, this guy just acts like a robot who’s from a different planet.

Think about the one memory that most NBA fans have of Kawhi Leonard. It’s not necessarily anything he’s done on the basketball court, but, instead, that viral video that showed him laughing when first being introduced by the Toronto Raptors a couple years ago. Seriously, this is what a superstar athlete is best-known for. Weird, man.

Given his reputation as being soft spoken, it shouldn’t come as a surprise to hear stories about Leonard’s subtleness when it comes to recruiting fellow players to join him on the L.A. Clippers. So what’s Kawhi’s strategy to do so? According to Serge Ibaka — who just inked a deal with the Clips — all the four-time All-Star has to do is send a simple text. At least that’s what happened to get Ibaka to L.A., with the big man recently describing the exchange.

Ah, yes, a man of very, very few words, that’s Kawhi Leonard. This story is so Kawhi that it’s not even funny, with Ibaka even showing some sort of reaction when talking about the recruiting pitch. Like, only Leonard can text something as simple as “what’s up?” to get another player’s attention. Sure, the two have history — winning a title with the Raptors in 2019, so it’s not like a blind pitch — but still, this is weird.

Bottom line is this: It worked. So maybe Kawhi Leonard’s actually a mad genius who uses his awkwardness and anti-superstar personality to his advantage? Yeah, that’s got to be what it is.