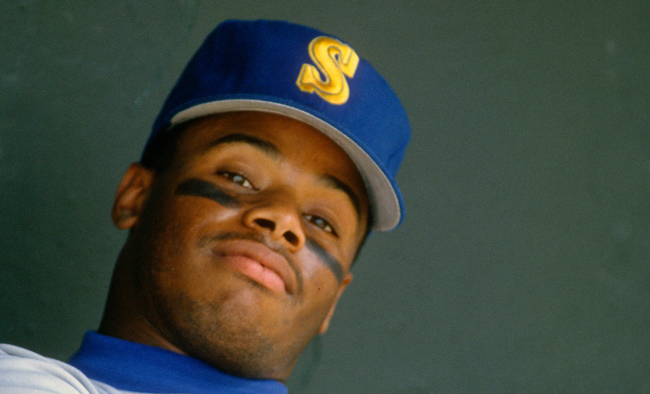 The well-known photographer and one of the highest paid players on the 2022 Cincinnati Reds roster, originally recreated the photo back in 2015.

That’s right. More than two decades later, one of the greatest hitters in the history of Major League Baseball broke out the same Seattle Mariners hat and even the same gold pendant for a new photo.

Ken Griffey Jr retook his 89 Upper Deck photo 33 years later and we can officially shut the internet down pic.twitter.com/7ItckGkb64

For the record, in 1989 Ken Griffey Jr. was a 19-year-old rookie who went on to hit 16 home runs, drive in 61, and steal 16 bases. He finished third in the American League Rookie of the Year voting behind Baltimore Orioles reliever Gregg Olson and Kansas City Royals starting pitcher Tom Gordon, and just ahead of Orioles third baseman Craig Worthington.

Olson would go on to save 217 games over 14 seasons with nine different teams.

Worthington would go on to hit 33 home runs and drive in 144 in seven seasons with the Orioles, Indians, Reds, and Rangers.

Griffey would play 22 years for three different teams and hit 630 home runs with 1,836 RBI before being elected to the Hall of Fame.

Did you know Junior is actually wearing a San Bernardino Spirits hat on the card and Upper Deck photoshopped it to look like a Mariners hat pic.twitter.com/Tdc9tsTeCv

“That was actually the first, pretty much,” Griffey admitted to The Sporting News in 2014. “That baseball card was me in a San Bernardino uniform, they just Photoshopped it.

“If you notice, the Mariners had the blue stripe down the center of the shirt,” Griffey added. “That one doesn’t have it. And if you look at the hat closely enough, you’ll see the trim of the red where the yellow is.”

It was the most iconic card of the JunkWax era. I don’t care if there’s millions of them out there. Upper Deck nailed it with the card, and Griffey Jr. delivered with a Hall of Fame career.

Many baseball fans still remember pulling the card as kids and being very excited.

I remember when I pulled this card in '89, one of the greatest moments of my baseball nerdism. Bought the boys a box for Christmas and before opening identified all the potential gems within. My oldest son pulled this card in the penultimate pack. We all celebrated. Amazing pic.