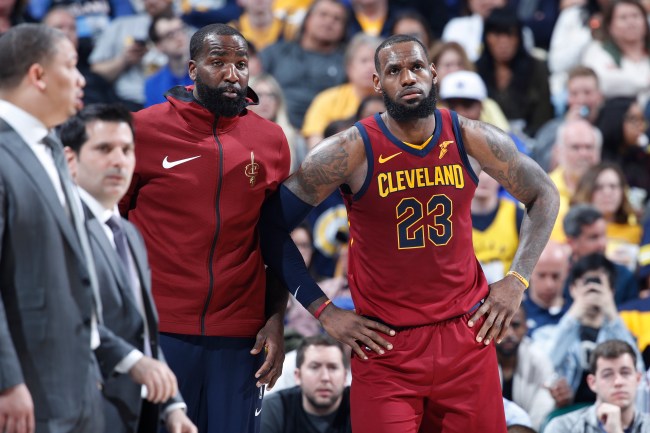 With Hong Kong protesters burning LeBron James’ jersey in the street, former teammate Andrew Bogut mocking his hypocrisy, and Muhammed Ali’s ex-wife essentially calling him a coward in comparison to her former husband, the face of the NBA is getting very little positive press for his comments about China.

While LeBron’s lunch table is looking sparse at the moment, former teammate and current analyst Kendrick Perkins is one of the few who isn’t dumping pudding on his head and yelling, “O’Doyle Rules!”

In an episode of ESPN’s The Jump, the NBA champion not only defended LeBron, but went as far to say Rockets GM Daryl Morey is in fact the selfish one.

The discussion starts at the 5:30 mark in the video below:

Here’s a transcript of what Perkins had to say:

“First of all, with LeBron’s interview, he didn’t agree or disagree with Daryl Morey’s tweet,” Perkins said. “He didn’t say he was right or he was wrong. All he said was the timing of the tweet. He spoke up for not just the players and the coaches, but Dave [McMenamin], Rachel [Nichols], you guys were in China also. He spoke up for your safety. No matter how you want to look at it, if you have ever been in China, once you step in their territory, they are in control. You have two beautiful twins at home, you have a family, you want to get back home to your family. He spoke up for safety. He didn’t say whether or not it was right or wrong.

“People took it out of context and went at Bron for not speaking up when they do have to realize that Bron is the face of the NBA. He’s the face of Nike basketball. And whether or not, if he speaks up on that, either way, he’s going to get backlash. So, he’s pretty much just taking a backseat, and I think it’s more on the NBA to speak up. It’s more of Adam Silver’s job to control this situation. This is not on LeBron.

Daryl Morey, outside of Magic Johnson, is one of the most active GMs that tweets all the time. I follow Daryl Morey and I’ve never seen him once tweet about things that are happening in his own country. So why take a stance when you all are in China in a whole other country and decide to send out a tweet like that. It was very selfish and you wasn’t looking out for others. So Bron is not the selfish person at hand, Daryl Morey actually is.”

It is a very bad time to be the face of the NBA. While LeBron obviously fudged this whole saga, I do not envy anyone who has to choose between one billion dollars and doing the right thing.