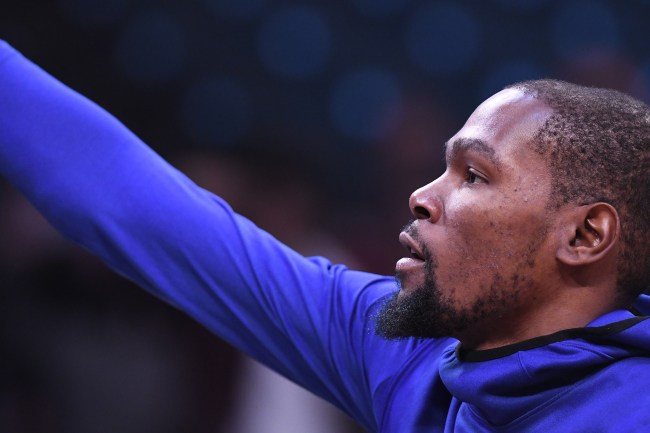 Kevin Durant leaving the Golden State Warriors this summer in free agency wasn’t a major shock, but the fact that it actually happened is still crazy. The two-time NBA Finals MVP and one-time league MVP was one of the first dominoes that fell in the wildest offseason in league history, signing with the Brooklyn Nets to team up with his buddies Kyrie Irving and DeAndre Jordan — which should set up the team to compete for titles over the foreseeable future.

While Kevin Durant might miss most if not all of next season because of his Achilles injury, more details have come out about just how determined he was to play with his buddies Irving and Jordan as free agency neared. In fact, he was so sure that he was going to team up with Irving — which had been a rumor for months — that Durant apparently announced his decision to sign with the Nets before he even had a formal meeting with the team.

Sean Marks said that Kevin Durant committed to the Nets via Instagram before he even spoke or met with the team.

That’s according to Brooklyn’s general manager Sean Marks, who spoke with the media yesterday for the first time since the major acquisitions.

“That sent a shock wave through everyone,” Marks said.

That’s pretty wild to think about, considering so many media outlets were wondering what teams Kevin Durant might meet with during free agency; which is something that never really happened since he decided the Nets checked off all the boxes he was looking for. It’s interesting to think that Irving and KD had pretty much made up their minds before free agency even opened up.

And while Durant’s begins his recovery from that Achilles injury he suffered during the NBA Finals, Marks wasn’t so sure that superstar would definitely miss all of next season, providing some hope that KD could return at some point. That’s got to be music to Nets fans’ ears.

#Nets GM Sean Marks hasn’t ruled @KDTrey5 in or out for the upcoming season. Left it open ended.

As a hoops fan, here’s hoping Kevin Durant comes back strong and returns to his usual form. Forming a Big 3 that helped change the entire landscape of the league, it’ll be exciting to watch the Nets with Irving and Jordan alongside Durant, and see if they can capture a title together.