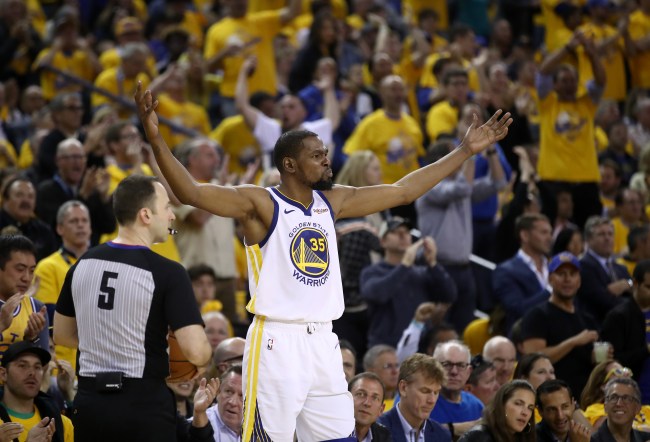 Kevin Durant’s status for the NBA Finals has been up in the air since the Golden State Warriors’ reached the championship round, with everyone wondering if the two-time Finals MVP will be able to play in the series against the Toronto Raptors. While it’s a total mystery as to when (or if) Durant plays to help his team try to win its third-straight title, people are going to great lengths to at least get some expert opinions.

That’s what CBS Sports did, because they reached out to Dr. Alan Beyer, an orthopedic surgeon and the executive medical director at Hoag Orthopedic Institute in Southern California, to see what a real-life doctor had to say about Kevin Durant’s calf injury, along with getting details on how realistic it is to expect the superstar to play. The verdict? According to Dr. Beyer, this day-to-day injury could result in something bigger if KD rushes back too soon, meaning he needs to really make sure he’s fully recovered and not rush back. That could mean Durant doesn’t play at all in the NBA Finals, per Dr. Beyer.

“This is not a black-and-white injury, as I said when it first happened and we got the diagnosis,” Dr. Beyer told CBS Sports. “I knew it would be at least two weeks recovery time even if it was just a Grade 1 strain. Now it’s been just over four weeks, so maybe it was a Grade 1-plus, or a Grade 2. Even if it’s just a Grade 1, this is a tough injury to gauge because you just don’t know when that function is going to fully return. It’s different for every athlete.

“All [Durant] can do is go through the steps and be patient, which has to be so tough for him right now. But this isn’t an injury you can rush. One, there’s the chance of re-injury, you know, if he comes back on a still partially torn calf and then fully tears it. That would be a major injury. He’s a free agent this year. He would really regret that.

“At the end of the day, this injury is a matter of performance. Durant is a guy that needs absolutely optimal performance of his gastroc muscle (calf) to jump. It’s not a play-through-it type deal. He can’t do the things he needs to do to play. Again, it’s entirely feasible that function just won’t return in time to play in this series. Or he could wake up and have that breakthrough he needs, ramp up his on-court activity and get back out there. It really is day to day.”

That’s not great news for Golden State Warriors fans, who find their team in a 2-1 series hole as Game 4 gets ready to tip tonight. At least the Dubs have Klay Thompson playing tonight — who missed the previous game due to injury — so Golden State supporters should be optimistic about inserting (yet another) All-Star into the lineup. Unfortunately, it’s not Kevin Durant. And, if Dr. Beyer’s prognosis is accurate, it might be time to accept the fact that Durant isn’t going to play in the NBA Finals this year at all.