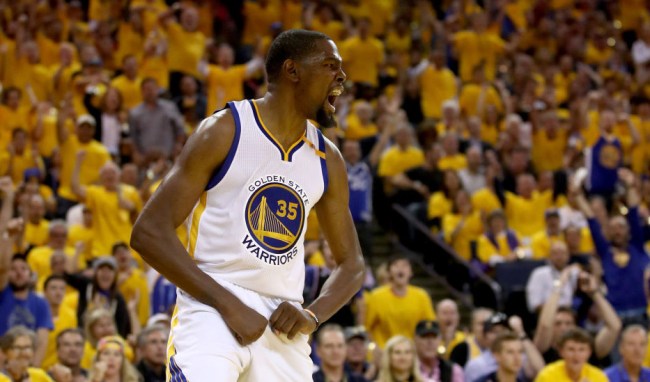 Kevin Durant, as we well know, has a very spotty history when it comes to using Twitter. It’s something he has gotten better at over the years and he is still one of the more accessible NBA superstars when it comes to that particular social media platform.

For instance, almost immediately after winning his first NBA championship Durant spent some time on Twitter just talking basketball with a bunch of random fans.

Of course, since he opened the door, that also led to him getting into it with the inevitable trolls and haters and forcing him to address a gross rumor about himself.

That little episode, however, has not deterred Durant when it comes to going hard at trolls on Twitter as evidenced by a spree he went on Monday night after a guy said that he named his dog after him and his dog left.

Hey @KDTrey5 I named my dog after you and he left me. What's up with that

My dog didn't really leave me. I'm just trying to get KD triggered

Which then led to the trolling floodgates being broken wide open…

oh word? He told u that?

how much did I pay for it?

so I should be grateful to be so lucky to be randomly chosen out of billions to be a member of the Nba champs? 🗣 HA

what the babies gon do?

Me and my best friend KD got Steph laughing now. pic.twitter.com/lTCcJ2LtKH

This is the most fun I've ever had on twitter.

Of course, there was also this obligatory comment about Kyrie Irving…

I named my dog kyrie and same thing happened.