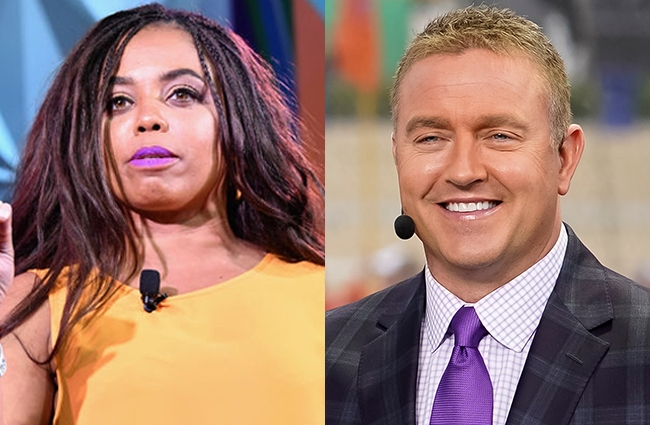 Based on how things have been trending over the past few years, it seems like there’s a fairly realistic chance that social media will play a key role in the ultimate downfall of society. With that said, it can also serve as a solid way to distract yourself from the fairly depressing reality we currently inhabit thanks to the dumb jokes and infinitely entertaining memes it spawns (which don’t even come close to canceling out the negatives but nonetheless provide a brief escape).

Unlike one of my esteemed colleagues, I typically try to avoid engaging trolls and finding myself embroiled in internet beef, but with that said, I absolutely love watching it unfold from the sidelines. As a result, I am very here for the online drama that’s recently unfolded courtesy of Jemele Hill and Kirk Herbstreit.

Social media doesn’t have to serve as a constant source of misery if you know how to navigate the toxic cesspool that it is by properly curating your various feeds and avoiding Facebook entirely. Over the decade or so I’ve spent grappling with a fairly crippling Twitter addiction, I’ve done a pretty good job figuring out how to avoid content that makes my life actively worse but there’s only so much you can do to avoid having a retweet occasionally appear on your timeline that does exactly that.

Thankfully, it’s fairly easy to filter them out thanks to the power of the block, which I’ve harnessed on more than a few occasions when I’m in an incredibly petty mood or feel the need to stop being exposed to the thoughts of people whose opinions I could not give less of a shit about.

On Thursday, Hill discovered that Herbstreit had decided to give her the block treatment at some point in time. There’s no telling what caused her former ESPN colleague to hit her with it, but after becoming aware of the development, she made sure everyone knew she didn’t care by tweeting about it four times in the course of 12 minutes after deploying the “I Just Think It’s Funny” approach frequently used by people who are totally, definitely not Mad Online.

I am hollering that Kirk Herbstreit blocked me 😂😂😂😂😂😂😂

I don’t even know that cat like that. I don’t think I’ve ever tweeted shit about him in my life. If i did, it was college football related

I just found out, otherwise we would have discussed it. I have zero idea why he would block me. Though i do have some suspicions

LMAO … same. I’m just amused to be blocked by somebody I don’t even talk about. https://t.co/x5SYRTlMBT

After a cursory search, I discovered Hill threw some shade at the College GameDay host back in 2010 but also complimented him on a pinstripe suit he wore during a broadcast the year before. I’d honestly respect the hell out of Herbstreit if that first one served as the catalyst but something tells me that’s not the case.

Great timing by Herbstreit: As soon as he says the O line hadn't given up a sack, they give up a sack + fumble

He is looking rather pimpish, LOL. Love it! RT @twstephens: Herbstreit needs a hat with a feather to go with that pinstripe suit.

Earlier this week, the former Ohio State quarterback informed the world he’s largely ambivalent when it comes to politics—which is decidedly not the case with Hill—and there’s a chance that could’ve sparked his decision to block her.

However, much like the world may never know how many licks it takes to the center of a Tootsie Pop, Herbstreit’s motivation here will probably end up being one of life’s little mysteries.