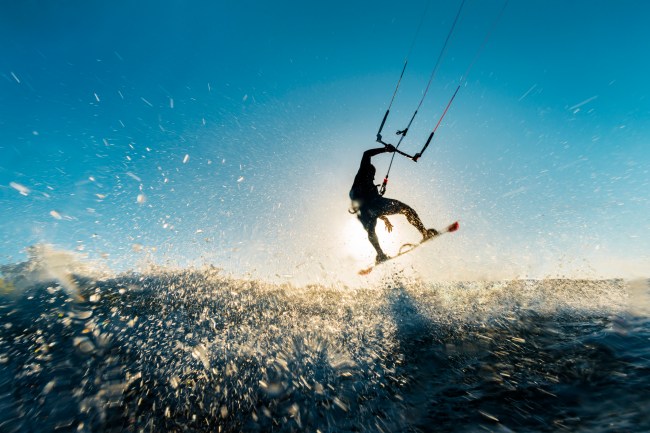 This kitesurfer jumping clear across a 140-meter island (~459 feet) is the clip I’m watching all day long. It’s only 23-seconds which is pretty perfect. I can’t stand those YouTube clips that are 15+ minutes long and expect me to watch 12+ minutes before they get to the damn point.

I need clips like this. Instant satisfaction that takes me through a roller coaster of emotions along the way.

This kitesurfer in Western Australia takes off and launches from the water just feet before he was set to ride into the island. He then soars across the 450+ foot island, throwing up the metaphorical middle finger to birds everywhere, and he seems to remain suspended in the air for a lifetime before clearing the island with just a foot or two of space to spare.

I’m sure this kitesurfer planned his descent accordingly but he really was just a few feet from landing in the brush and eating shit. He would’ve been stuck in the bushes, cut up and bleeding, and feeling the stings from the saltwater. Instead, he executed the perfect takeoff and landing.

I feel like I’ve missed the boat on kitesurfing. I had the chance to do it once at the beach with the rig set up but I was standing on the sand for 75% of the time and struggled in the water. Then I moved up to NYC for years and haven’t had a chance to get back into it yet now that I’m back in Florida but it looks like such a fun workout once you nail the basics.

I guess the one thing that’s pretty offputting about this sport is the cost. It’s expensive as balls. The kite + harness setup are expensive. You *should pay for lessons when you get started so you do it right. And it’s only done in specific locations. It’s not like skateboarding where you can buy a deck, trucks, wheels, and get started anywhere. Still though, how badass was that jump???