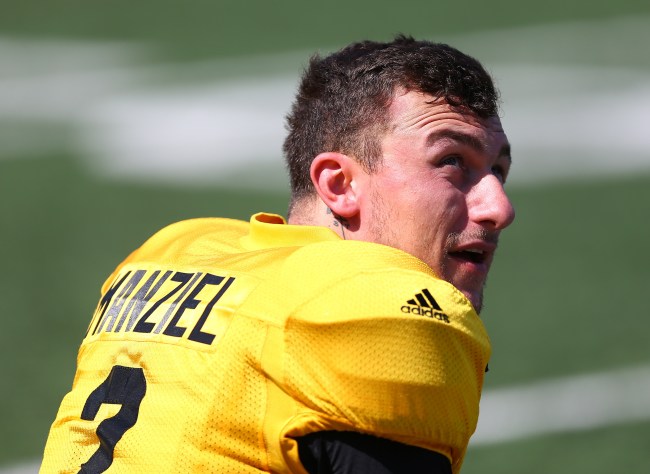 The past six years of Johnny Manziel’s life have played out under the scrutinizing eye of the general public, for better or worse. I know more about Manziel at this point than I do about some of my own relatives, no offense Auntie Lynette but do something interesting for once. Try drugs.

Among the many defining images of the 25-year-old Heisman Trophy winner is the infamous photo of him wearing a Scooby-Doo costume at a Halloween party grinding with a woman in lingerie.

On Manziel’s Comeback Szn podcast, we learn that the photo was taken the night before Texas A&M departed for a road game against No. 17 Mississippi State. Kliff Kingsbury, who was the offensive coordinator at Texas A&M at the time, joined the podcast to discuss how Johnny was nowhere to be found at the team meeting the next day.

"As a staff we're thinking, 'damn that chick's hot, good job Johnny' thinking he's going to be on time the next morning…"

“Johnny has some crazy excuse. His roommate pulled the plug on his alarm clock, or something, electricity. But we already know what he’s been doing.

“So he misses the offensive meeting, trots out to walkthrough — Coach Sumlin (former coach Kevin Sumlin) doesn’t know at this point that he’s late — goes through the walkthrough, probably, I think, still a little intoxicated at that point.

“We do our deal, (he) gets on the plane, goes to Starkville, plays the best game I’ve ever seen. At that point, I’m like, ‘This kid is not human.'”

After Manziel got blasted the night before and admittedly puked in trash cans at the walk through, he played arguably the best game of his career–completing 30-of-36 passes for 311 yards and rushing for another 129 yards and two touchdowns in a 38-13 blowout win.

Johnny Manziel may be a lot of things, but predictable is not one of them.