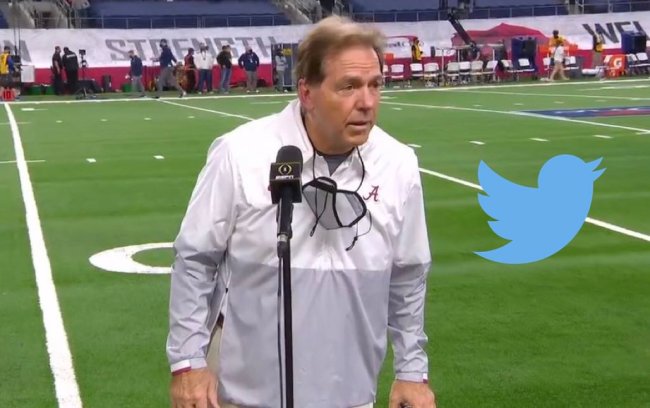 Word of advice to all of the young guns out there: delete your old Twitter right now and start fresh. If you’re still in college, just do it. You can always start fresh. Because I promise you the stress of rebuilding your following, or whatever, will be less than that of wondering if an employer ran your @ through a trigger-word search. The reason you need to apply the rip-off-the-bandaid method to your old (potentially from high school) Twitter account is that going forward, you can count on both your present and future to not saying anything *too* stupid, which is something that simply cannot be said about your past self. At least the idea, right?

Unfortunately for her, someone obviously hasn’t gotten my memo to Nick Saban’s daughter, as she tweeted and deleted earlier today that Ohio State’s COVID cases are mere “BS” that are being exaggerated in order to buy more time for their quarterback Justin Fields to heal.

Nick Saban's daughter, in a tweet she's since deleted, has some thoughts on the championship game.#BYE pic.twitter.com/vAoTgYZBaz

Not only is Kristen Saban downplaying the severity of the COVID pandemic (she’s the one whose brain thinks it’s a tool that could be used to your advantage in college football), but she’s also essentially called Ohio State liars in the process. And not just liars, but lying about something as literally life-and-death as COVID! A good ole twofer of hot takery.

To be fair to Kristen, if her name was, let’s say, Karen Maban, then no one would give a shit about her COVID-meets-college-football conspiracy theories. But the fact that she’s the daughter of arguably the greatest college football head coach of all-time as he heads into yet another championship game is what makes it a story. Her father is has been famous for long enough that she should know when she fires off conspiracy theories about a rival opponent, writers like me on the internet are going to make a story out of it. Time is a flat circle, as a wise old drinking buddy of mine once said.