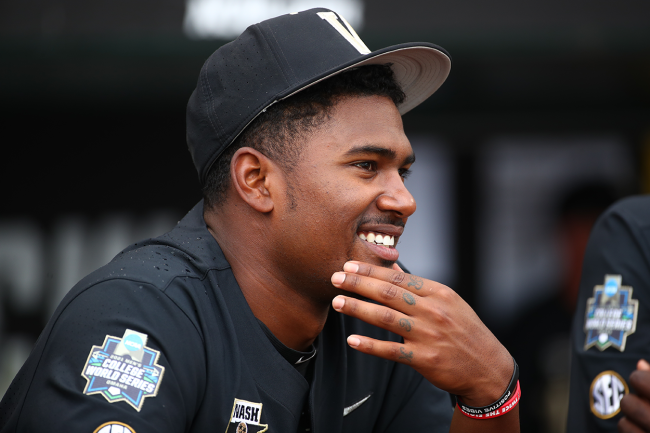 The New York Mets chose to pass on former Vanderbilt pitcher Kumar Rocker and that’s starting to look like a big mistake. He is four starts into his professional career in an independent league and he’s looking like a star so far.

Rocker, who was Vanderbilt’s ace in 2020, played second fiddle to Jack Leiter last year. That didn’t stop him from mowing down the SEC.

After both of their seasons, Leiter went No. 2 overall and Rocker went No. 10 overall in the 2021 MLB Draft. But the latter did not end up signing.

The Mets, who drafted Rocker in the first round, offered their hopeful future ace a signing bonus that was $1.4 million above the slot value for the pick. However, after reviewing his medical information, New York chose not to make Rocker an official offer and received a compensatory pick in this year’s draft.

Scott Boras, who is one of the top sports agents in the field, represents Rocker. He has disputed the team’s claim about his client’s health. The Mets also released a statement.

Mets GM Zack Scott on Rocker: “This is clearly not the outcome we had hoped for and wish Kumar nothing but success moving forward. We’re excited about the players we have signed and look forward to watching them develop and contribute to the organization in the years to come.”

Regardless of what the truth might be in regard to Rocker’s health, he did not sign with New York — or any MLB team — and did not return to the Vandy Boys. He is currently pitching for the Tri-City ValleyCats of the Frontier League and he is on a tear.

Rocker’s first two professional starts in the independent league were extremely strong and his velocity slowly started to get back to where it was in college.

In the third start of his career, Rocker allowed two hits, one run and struck out seven in four innings of work, and he did so in front of Boras. He was so good that he actually recorded four strikeouts in the second inning after a batter reached on a dropped third strike.

Rocker took the mound again on Wednesday night and topped out at 97.6 miles per hour on his fastball. He threw 58 pitches in four innings, allowing two hits, no runs, and one walk with seven strikeouts.

Former CWS MVP and top 10 pick Kumar Rocker showcasing his stuff in front of over 20 MLB scouts for the Tri-City ValleyCats of the Frontier League pic.twitter.com/IERrqjneRr

Through his first four starts with the ValleyCats, Rocker has pitched 15 innings, struck out 25, allowed three walks and nine hits, and has an ERA of 1.80. The scouts have certainly taken notice.

After the game, Rocker spoke about his outing.

The 2022 MLB Draft is quickly approaching and Rocker will be in the pool once again. He has positioned himself to hear his name called in the first round for the second year in a row (if the money is right) and will likely not drop past the second round.

If Rocker becomes the ace that he is proving to be, the Mets are going to look mighty silly!