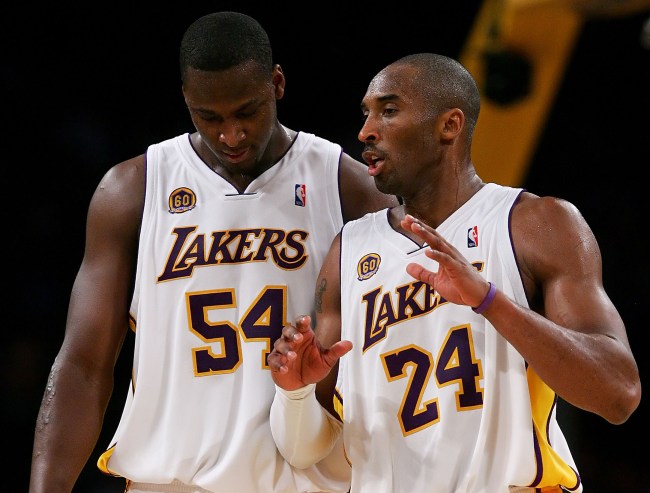 When most people think about the name Kwame Brown, sadly, the first thing that probably comes to mind are two words: “draft bust.” After being handpicked by Michael Jordan to go No. 1 overall in the 2001 NBA Draft, the former high school phenom completely flopped in the league, not only showing his immaturity, but not showing much of any skills while on the floor.

After Jordan’s Washington Wizards selected Brown, the kid had trouble finding his role, stuck between expectations of being the top overall pick and the reality that, well, he just wasn’t very good. That led to Kwame becoming a journeyman in the league, bouncing around from team to team before, ultimately, being cut for good by the Pistons during the 2013 season.

Among Kwame Brown’s stops in his NBA career were the Los Angeles Lakers, who paired him alongside a couple other B-level players to try and support Kobe Bryant. Remember, these were those post-Shaq Laker days when the roster consisted of veterans just trying to squeeze the last ounce of juice from their proverbial lemons. The experiment failed badly.

However, one of the shining moments from those pathetic Laker days was Bryant’s 81-point performance against the Toronto Raptors in 2006, which still ranks as the second-most points ever scored by a player in a game, only trailing Wilt Chamberlain’s 100-point performance in 1962. And, wouldn’t you know it, Kwame Brown was on the floor for the contest, racking up 32 minutes in the Lakers victory.

“Yeah, me and Kobe dropped 82 combined and we won. ‘See you little punk na ain’t number one,’ then they never sacrificed. Let me get this straight. So everybody love Kobe Bryant and wanted to see him score and wanted to see him shoot. So he scored and he shot and the people around him didn’t get that many shots and they didn’t score and you mad? Didn’t you get what you wanted? Are you not entertained? He hit 81 motherf*cking points. Did you see the screens I was setting, na? The f*ck is wrong with you? Are you not entertained? What do you n***s want? That’s why I don’t listen to you.”

Now, look, I personally won’t add insult to injury here, because Kwame Brown has more basketball talent in his left pinky than I’ve ever had. He may have flopped in the league, but he had enough potential for the Wizards to take him No. 1 overall, so it just didn’t work out for him for some sad reason. Nobody should cheer for that.

However, just because I won’t pile it on doesn’t mean Twitter folks won’t. And, given the fact Brown was bragging about the screens he was setting for Kobe, you just know social media had a field day in clowning the former NBA player. Take a look below at some of the comments.

Bragging about setting screens😭😭😭 that’s the highlights of his career

Kwame in that game: pic.twitter.com/pjZRb5niLT

Obviously, Kwame Brown’s NBA career didn’t go as he, his family, his friends or anybody else had hoped it would. Whether it was lack of work ethic, too much pressure all at once, failing to have the maturity to be a professional, or something else, nobody will ever really know. It’s sad to see him holding on by a thread here, though, trying to stand up for himself for being one of the biggest draft busts in NBA history — because, as this shows, it only leads to more embarrassment from Twitter trolls.