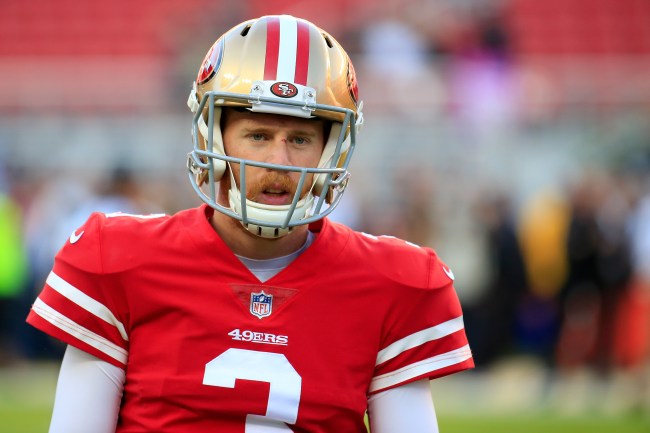 The San Francisco 49ers, in the midst of one of the greatest regular season’s in team history, were reminded how little it ultimately all means after learning of the tragic death of the brother of Niners back-up quarterback C.J. Beathard.

Clayton Beathard, 22, was reportedly one of two victims stabbed to death outside the popular Dogwood Bar in Nashville early Saturday morning. Beathard and 21-year-old Paul Trapeni III were both rushed to Vanderbilt University Medical Center where they ultimately passed away.

Niners head coach Kyle Shanahan, who visited Beathard for an hour upon hearing of the tragedy, gave an emotional tribute to the third-year quarterback following the team’s 34-31 win over the Rams.

For the Beathard family ❤️ pic.twitter.com/Td26FyOEND

“There’s not much you can say. You just try to hold a person and be there for him. We tried to figure it out, what we could do and the quickest way to get him to his family. But that was probably my first time in a situation like that, but I think it’s exactly what anybody would expect. There’s nothing to say, and it’s as tragic and as sad of a thing that can happen.”

According to Fox News, police claim the tragedy was initiated by an “unwanted” advance made “by a man toward a woman in the bar.”

While no suspects have yet been named, Nashville PD has announced that it is seeking 23-year-old Michael D. Mosley for questioning in the incident. Nashville PD know Mosley’s face, they were on the hunt for him less than five years when he allegedly was accused of being one of two men who shot and stabbed another person during a custody dispute.

BREAKING: Detectives are seeking Michael D. Mosley, 23, for questioning in Saturday morning's double fatal stabbing outside The Dogwood Bar,1907 Division St. The stabbings occurred during a fight outside the bar. The investigation shows Mosley was present… pic.twitter.com/wr7vOouiTH

We’ll keep you posted on how this nightmare unfolds.