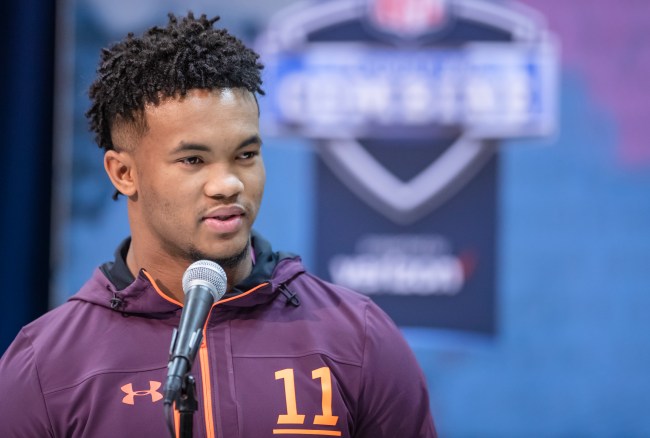 Kyler Murray’s expected to go No. 1 overall in tonight’s NFL Draft, or so many pundits think so after the months-long scouting process. Had someone suggested to the quarterback that that scenario was going to happen just 10 months ago, there’s a good chance Murray wouldn’t have believed them. Sure, the dude is the reigning Heisman Trophy winner, seemingly, coming out of nowhere to be in the position he’s currently in, but it took a helluva lot of patience and decision-making on his part.

That’s because, as everyone knows, just 10 months ago Kyler Murray was, technically, a professional baseball player, having been drafted No. 9 overall in the MLB Draft by the Oakland Athletics. After signing with the MLB team, he was given permission to play college football for one season — taking over for incumbent Oklahoma Sooners quarterback Baker Mayfield — with both players winning the aforementioned Heisman Trophy in consecutive seasons. That’s when Kyler Murray knew football was his sport.

But the waiting game wasn’t easy. He transferred to Oklahoma from Texas A&M. He sat behind Mayfield. He wrestled with the decision to either pursue a pro baseball career or go for a career in the NFL. Kyler Murray ultimately went with his heart, deciding that he was all-in on football — and Nike, with whom Murray signed an endorsement deal with — released an awesome ad before tonight’s NFL Draft that shows Murray’s journey. Check it out below, because it’s pretty inspiring.

Maybe I’m just a sap for the dramatic music and highlights of a young Kyler Murray, but this thing is awesome. Plus, kudos to Nike for having Murray do the voiceover for the ad, because it gives it some authenticity that would’ve been lost if the brand just flashed some encouraging words over the images.

The ad reminds us all that, just because you’re not in the position you want to be in — and have to wait your turn to get there — when you work hard AF, have talent and things go your way, you take advantage of the opportunities in front of you. Sure, Kyler Murray is a freak athlete who many say is lucky to have had a choice between football or baseball, but he created his own path by working hard his entire life to get to this point, and if he becomes the No. 1 pick in tonight’s NFL Draft, it’ll be the culmination of it all.