NBA Insider Believes The Kyrie, KD Situation Will ‘Work Itself Out’ In Brooklyn 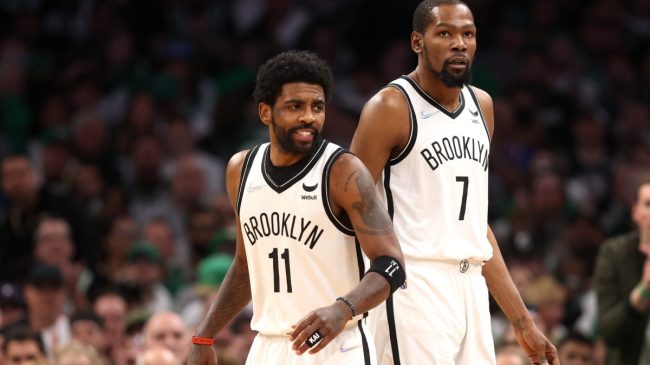 The Kyrie and KD saga in Brooklyn has been the storyline of the NBA offseason. The two stars have voiced their unhappiness with the Nets, leading to rumors and best guesses on where the duo will end up.

We’ve seemingly gotten an answer to one of those questions already.

After toying with the idea of hitting the free agency market, Kyrie Irving opted into his massive $37M player option with Brooklyn. The move has locked him in with the Nets, for now, though the possibility of a trade is certainly still on the table.

Most rumors surround Kyrie wanting to join up with LeBron and the Lakers, but it seems more likely he’ll be in Brooklyn when the season starts.

So, that just leaves Kevin Durant.

His future is a bit more unsettled. He’s publicly asked for a trade from the team, with teams like the Suns, Warriors, and Heat all being rumored as possible destinations.

Unfortunately, it doesn’t seem that teams are willing to create a package attractive enough for the Nets to accept. If Brooklyn is unable to find a suitor, he may have no choice but to return. The team isn’t just going to trade him to trade him. They want value as Durant is one of the league’s top players.

That puts everyone in a bit of a predicament, but one NBA insider believes that this situation will all work itself out over time.

NBA insider believes Kyrie, KD saga will work itself out

Insider Brandon Robinson believes that the Kyrie and KD situation will take care of itself in Brooklyn, and that both players will be back when the season begins. Here’s what he had to say while joining the Live On The Line podcast.

Can the KD and Kyrie situation work itself out in Brooklyn?@ScoopB explains why it might on @liveontheline: pic.twitter.com/xqYXfnhOd1

“There is a good chance that you could see those guys suit up come opening night, but that was always the case. From everyone I’ve spoken to, honestly and truly, this is a situation that can work itself out… You’ve got two top 76 players that are teammates, and you mean to tell me you guys can’t figure this one out? Yeah, they can.”

He commented on the trade rumors surrounding Kevin Durant, but says that certain factors could lead to a stay in Brooklyn. Most notably that they owe it to the area to bring home a championship.

“I know that a lot of trade rumors have been going on, specifically about Kevin Durant and him wanting out, but there are some factors… We’ve seen stars request trades before… I’m told that this is something that can be worked out, and cooler heads have to prevail in this situation. You’re talking about two guys that have won championships, and it’s a four-year partnership.

“They owe it to the New York metropolitan area to ride this out.”

Interesting commentary, but it seems like the most likely scenario at this point.