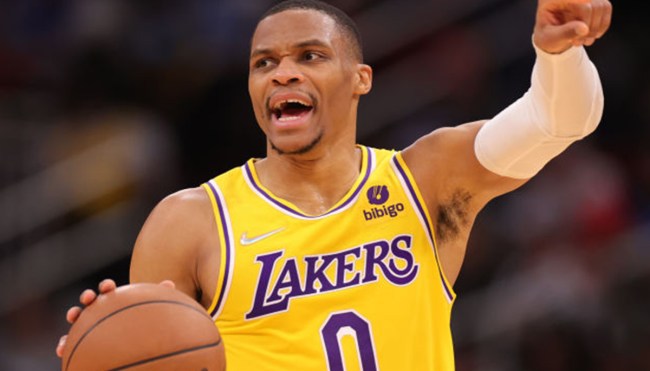 Earlier this week, Karl-Anthony Towns managed to rustle plenty of jimmies when he lightly criticized Russell Westbrook’s playstyle by accusing the guard of chasing stats—an accusation that even the most casual basketball fan has to agree is pretty accurate.

Towns made it clear he respected Westbrook’s skills, but he made a very valid point when he prefaced his jab by saying, “I’m from a place where you get stats and you lose, that s—t is pointless. I don’t go home and get love for the stats.”

On Wednesday night, Westbrook managed to get some love from the Los Angeles Lakers Twitter account after posting the 195th regular season triple-double of his career in a 104-99 loss to the Grizzlies.

However, many Lakers fans didn’t follow suit thanks to a fairly costly mistake Westbrook made late in the fourth quarter. With a little less than two-and-a-half minutes remaining in the contest, Russ had the chance to net a virtually uncontested layup to cut Memphis’ lead to one but blew the opportunity.

WESTBROOK BLEW THE LAYUP THEN STARED DOWN AT BOTH HIS HANDS LIKE HE NOT CONTROL OF THEM MFS LMFAOOOOOOOOOOO pic.twitter.com/D6xYSMoAr6

That brainfart occurred less than a week after Westbrook drew the ire of fans thanks to a less-than-stellar performance on Christmas, and people were not shy about putting the Lakers on blast for celebrating an achievement that was overshadowed by the loss.

no way u posted this

I speak for all laker fans pic.twitter.com/FxIuxanycw

I speak for all laker fans pic.twitter.com/FxIuxanycw

This is gas lighting. https://t.co/qwsxvFWA6M

Westbrick’s final 3 possessions in the last minutes of a close game:

Filed under: Things you truly hate to see.