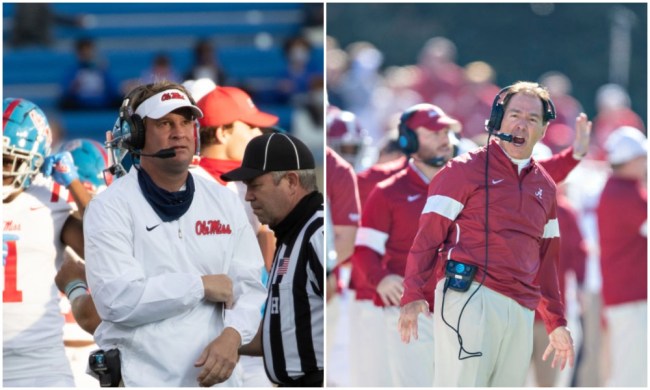 On Saturday, Lane Kiffin will get his first shot at Nick Saban and Alabama since leaving the Tide’s staff to take the FAU head coaching job in 2017. Having coached under Saban from 2014-16, Kiffin of course has some history – some good and some bad -with Saban, and heading into this weekend’s matchup at Ole Miss, the dynamic between the two coaches has been a major talking point.

Saban has never lost to one of his former assistants while at Alabama.

When asked about the matchup earlier this week, the 45-year-old Kiffin avoided the typical coach speak answer and delivered a hypothetical that if the coaches were the ones hitting the field, the 68-year-old Saban wouldn’t be able to cover him.

Saban was actually asked about Kiffin’s ‘old man’ comment during a presser earlier in the week and gave a bit of a jab back Kiffin’s way explaining that he still thinks he has the ability to cover.

“Well I think he’s probably right, I wouldn’t disagree with him,” Saban said while laughing. “I guess what I would ask when he’s my age, what’s it gonna be like? It’s a little bit of a disadvantage to be my age and have had a hip replacement. But I still pride myself in my ability to cover, I just don’t think I could cover him.”

Nick Saban responds to @Lane_Kiffin comments about him being elderly, unable to cover him if he was a DB in a game. pic.twitter.com/unbo4bYPLx

Kiffin’s three seasons at Alabama were exceptional as the Tide won three SEC Championships and won one national championship in two trips.

Ole Miss will have its hands full against Alabama on Saturday, specifically the Rebels’ defense, which ranks dead last in all of Division I football allowing 600.5 yards per game.