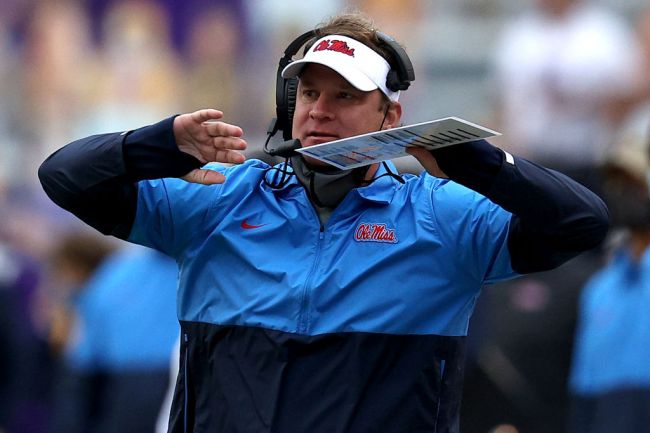 Kiffin and Saban have a history together as Kiffin was the offensive coordinator at Alabama from 2014-16. The Rebels’ head coach has witnessed first-hand just how great of a coach and how big of a rockstar Saban is in Tuscaloosa.

Kiffin joined ‘The Dan Patrick Show‘ on Tuesday morning and was asked “How much is Saban worth if you put a dollar figure on it each year to the program?”

Way more, according to Kiffin.

“Way more than what he makes,” Kiffin said. “I understand faculty and when people say, ‘OK, how does a guy like that make that much money when he’s just coaching football?’ But the money he brings into the program and the university. When a football program’s rolling, the university changes, student applications change, so tuition goes up. Everything changes.

“So as crazy as it is, kids around the country watch a football program doing well and say, ‘I want to go there.’ Even though they don’t play football.”

"A little bit at times, especially when [Saban] announces that his back up quarterback from last year is getting a $1 million. That's going to be a little hard to recruit against."

–@Lane_Kiffin tells us it can be difficult recruiting against Saban and @AlabamaFTBL at times 😂 pic.twitter.com/t6Y7sjfHqG

So, even with that new money, Kiffin still doesn’t believe Saban is paid enough.

Everything that Kiffin said was spot-on. The amount of money Saban has brought to the University of Alabama is unfathomable. Having an elite football program in the SEC creates a ripple effect for every other sport on campus, enrollment, tuition, the town’s economy, and practically anything else you can think of.