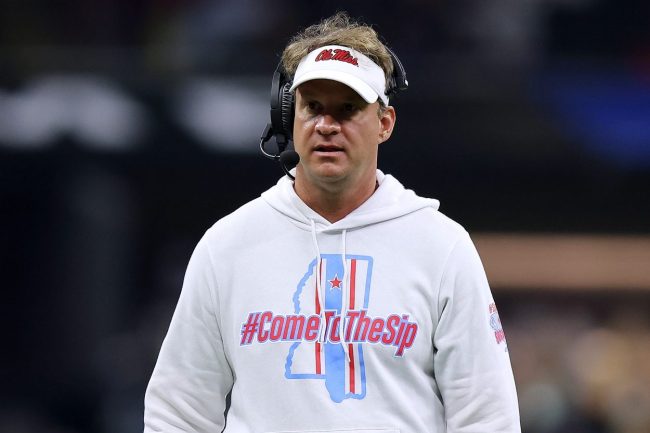 Of all of the coaches in college football, none are as funny or more active on Twitter than Lane Kiffin. Earlier this year, the third-year head coach of Ole Miss explained why he is always online and it’s because it allows him to use the platform as a recruiting tool.

That was certainly the case on Tuesday. The Rebels are currently in the middle of a heated recruiting battle for two high-profile transfers.

The two former Trojans are considered a package deal and their recruitment is down to Oklahoma and Ole Miss, but the former doesn’t really make any sense for either of them. Nevertheless, both schools have been in heavy pursuit.

Trigg and Dart visited Norman first and then flew directly to Oxford and took some icy photos with Kiffin.

The Sooners coaching staff visited Dart in Utah last week and lingered around, while Ole Miss has visited Dart on three occasions. The first two times were by assistants.

And then, after initial speculation, it was confirmed that Kiffin visited Dart in Los Angeles on Monday. The 46-year-old even wore his $6,000 Dior dunks for the meeting.

Needless to say, the Rebels and their head coach want Dart to be the quarterback of the future and for him to throw the ball to Trigg.

Kiffin made another pitch to Dart on Twitter on Tuesday afternoon and it came in hilarious fashion. During Monday night’s basketball game between Ole Miss and Florida, the Rebels pulled a student from the stands for some sort of promotional stunt.

After he made his appearance on the big screen, he quickly pulled out his photo and displayed a message to the crowd.

“WE WANT DART AND TRIGG”

Someone captured the moment on her phone and posted it on Twitter, tagging Kiffin.

This was funny. When he got his shot on the jumbotron, he was ready. @OleMissFB @Lane_Kiffin pic.twitter.com/OUKJtydT4P

In a not-so-subtle recruiting pitch, Kiffin retweeted the post to let the world know that he too wants Dart and Trigg. 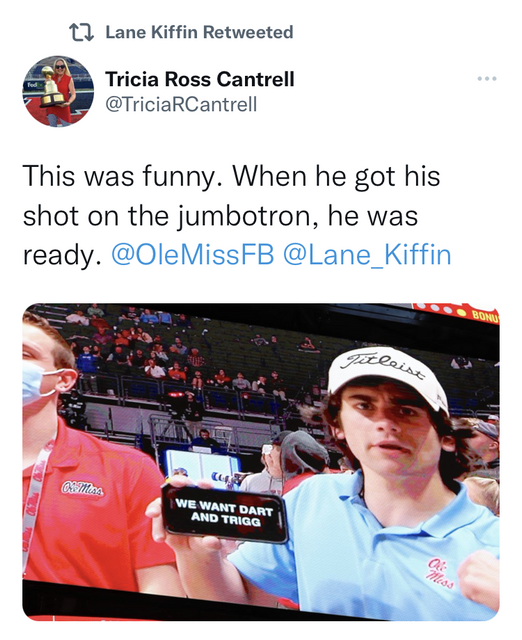 The moment itself was hilarious and the student saw his opportunity to shine and ran with it. Kiffin’s retweet just makes it that much funnier.