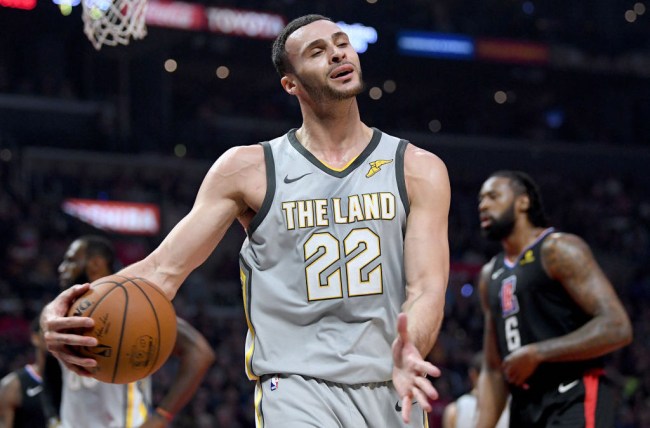 On Sunday, Larry Nance Jr. headed to Los Angeles with the Cavaliers to take on the Lakers for the first time since he was traded to Cleveland last month. The homecoming didn’t turn out as he’d probably hoped, as the Cavs ended up losing by a final score of 127-113 despite an insane pass from LeBron James that rivaled the ridiculousness of a play he made last week.

You could point to plenty of reasons to explain why the Cavaliers failed to come away with the win, but based on a video that’s started circulating today, I think there’s only one explanation: good ol’-fashion karma.

The clip shows Nance walking across what appears to be the UCLA campus in practice gear when he’s approached by a young fan who could have theoretically been an assassin dispatched to kill the former Laker but who was in all likelihood just trying to score an autograph. Nance clearly notices the kid, but instead of taking the four seconds it would require to sign something, he decided to go with the vintage but effective “look at your phone and quickly walk away” method of avoiding someone.

There’s obviously no context to this, but if you show me a picture of a guy covered in blood holding a knife next to a dead body, I don’t need a mat in order to jump to a conclusion.

Based on how the internet has been acting recently, I’m sure it’s only a matter of time until someone launches a GoFundMe for this kid so he can raise enough money to buy the Cavaliers and cut Nance from the team.