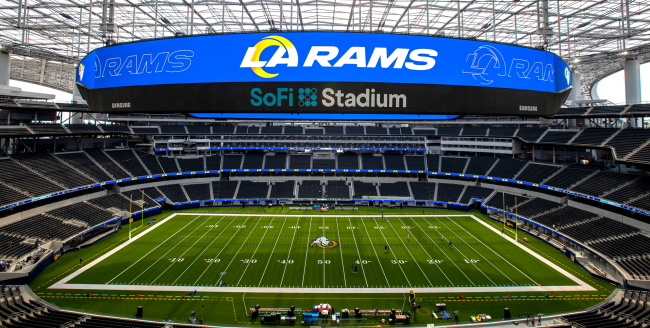 Back in February, it was reported that the city of St. Louis, St. Louis County, and the St. Louis Regional Convention and Sports Complex Authority had filed a lawsuit against the NFL and its 32 teams over the 2016 relocation of the Rams to Los Angeles. The lawsuit reportedly was seeking in excess of $1 billion in damages.

The plaintiffs in the lawsuit claim the Rams did not follow NFL protocol and “make a good faith effort to stay in their home market.”

Proceedings in the case continued this week and Rams owner Stan Kroenke and COO Kevin Demoff, as well as NFL Commissioner Roger Goodell, appear to have suffered a significant setback, as a judge ruled that the plaintiffs will be given access to data concerning the financial worth of Goodell as well as five NFL owners including Kroenke, Jerry Jones, Robert Kraft, John Mara, and former Panthers owner Jerry Richardson.

Randy Karraker of 101 ESPN has been covering the case in St. Louis.

STL claims NFL kept discovery confidential. Email from Eric Gruman-"I'm trying to get some terrific L.A. opportunities to fruition under cover of darkness."

Another setback for the NFL reportedly is the claim by the plaintiffs that based on previous testimony, Roger Goodell clearly and directly contradicted the NFL’s position on the Rams’ relocation.

In deposition, Goodell held relocation guidelines in his hand. Was asked "are these mandatory?" (to abide by) Replied "Counselor, it says right here, (they are).

2014 Email from Demoff to NFL says L.A. land story is coming out. League responds "what should we say." Demoff provides talking points that Goodell uses in Super Bowl press conference, denying he knows land purchase by Kroenke is for stadium.

Peacock e-mail to Demoff telling him about National Car Rental naming rights deal. Demoff responds with link to YouTube video that screams "F it, I'm out."

The plaintiffs also presented evidence that a phone call took place in 2013 between Kroenke, Goodell, Mara, and Steelers owner Art Rooney in which the Rams owner said, “I’m going to buy two parcels of land and build a stadium in L.A.”

Kroenke also allegedly added in the call that he was trying to stay under the radar and keep the purchase of the land hidden.

“We will respect your confidentiality,” Goodell allegedly responded.

Other notes-NFL never intended to force Kroenke to negotiate in good faith.

Ben Frederickson of the St. Louis Post-Dispatch is also covering the case and reports that Rams COO Kevin Demoff appears to have also clearly had no intention of negotiating in good faith with the city of St. Louis.

Demoff reportedly referred to a thank you and good bye letter to the city of St. Louis as “the AMF letter” with AMF standing for “Adios, motherf—ers.”

Something else from STL side discovery revealed today during discussion of Rams' contempt for STL, lack of good-faith dealing …

Day before relocation vote, Rams staffers were writing letter meant as goodbye to fans. It was referred to as "AMF" letter, for "Adios, mother f-ers" https://t.co/qYvkwddugt

Continuing theme in Rams relocation saga is how bad some of the public comments from both Kevin Demoff and Eric Grubman were when factual timeline is presented. Against the law? We will see. Certainly dumb. Could be more than that.

Meanwhile, the Rams just unveiled yet another new jersey they are calling a “Modern Throwback” just a year after the Rams also released a new uniform.

Throwin’ it back with a modern twist. pic.twitter.com/pa4sJGLM8R

Gotta pay for that lawsuit defense fund some way, right?

Lost in all of this apparently is the fact that the city of St. Louis, the previous home of both the Cardinals and the Rams, got both of their NFL teams by taking them from other cities (Chicago and Los Angeles respectively) before both franchises hightailed it to greener pastures.

St. Louis should have just closed that deal to steal the Patriots and make them the St. Louis Stallions back in 1994 and none of this would be an issue today.