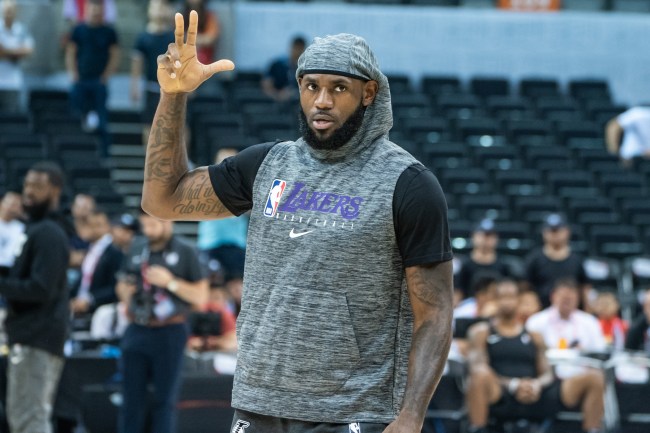 LeBron James is one of the most outspoken athletes on the planet, which has helped him become a leader in social issues and by giving other athletes a platform to voice their opinions. From his HBO show The Shop to his UNINTERRUPTED social platform, James has redefined what it means to be an athlete in an age of social media and nonstop content.

Unfortunately, James’ latest comments have come back to burn him, as the Los Angeles Lakers superstar voiced his displeasure for Houston Rockets general manger Daryl Morey’s recent tweet about the situation in China. LeBron James, talking to reporters the other day, even went as far as saying that Morey “wasn’t educated on the situation at hand,” and added that, while he believes in Freedom of Speech, “at times, there are ramifications for the negative that can happen when you’re not thinking about others and you’re only thinking about yourself.”

Considering LeBron James is a global icon, his comments upset protestors in Hong Kong, with some going as far as burning his jersey in a scene that looked tense in China all day today.

Now, according to ESPN’s Dave McMenamin, it’s believed that LeBron James was so upset with Morey’s tweet that he even demanded the NBA take action to discipline the Rockets GM, with McMenamin detailing a conversation during a players meeting on Oct. 9 before the Lakers-Brooklyn Nets game in Shanghai, according to a report published by The Athletic, which argued that a player would receive punishment had he tweeted out something similar.

“Nearly a week ago today, in a Shanghai hotel room, or Shanghai hotel ballroom, Adam Silver got up and addressed the players, and LeBron James is one of the players who got up and spoke and said, ‘Hey, what are we doing here? Daryl Morey made these statements,’” McMenamin recalled on air Tuesday. “You know damn well if a player made the same statements and caused such poor ramifications for the league, there would be some sort of league recourse.”

“There would be repercussions the player has to pay. You know, potentially this tweet could cost the NBA hundreds of millions of dollars. That could come out of the players’ pockets, and so that’s the double standard that was being addressed in that meeting,” he continued.

For those who want to see the entire report from Dave McMenamin, which aired on SportsCenter earlier, take a look at the video below.

LeBron James might be known for being a leader on social issues, but, right now, his latest comments have put him in some hot water, leading to many of his global fans to rebel against him and the current position he’s taking on the issues at hand. With NBA Commissioner Adam Silver supporting Morey’s right of Freedom of Speech — although, in a statement, he did sound sympathetic for those in China that were offended by Morey’s tweet, while stressing that his remarks did not capture the league’s views — it doesn’t sound as if the Rockets GM will get any sort of punishment for his actions.

Overall, it’s a sad and scary situation for the league, which could cost the NBA and its teams and players billions, so this is an issue that needs to be resolved soon as the regular season approaches.