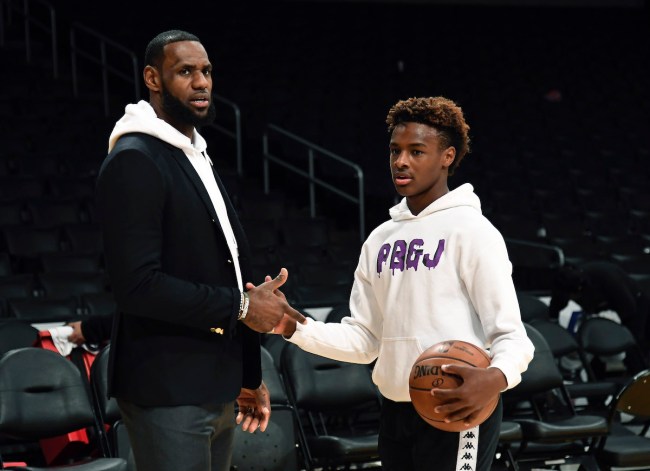 In case you missed it, the greatest baller on the planet quietly re-upped with the defending NBA champs, as LeBron James inked a two-year contract extension with the Los Angeles Lakers on Wednesday morning. While this seems like business as usual — as there was never any indication that the four-time champ would ever leave Tinseltown — it does bring up a potentially interesting scenario in a couple of years.

That’s because LeBron’s oldest son, Bronny James, could be set to enter the NBA in 2023, as the current high school prospect is in his sophomore year at Sierra Canyon (Calif.), which is a program that’s producing absolute studs at the moment. While the NBA currently doesn’t allow high schoolers to jump to the league anymore, like it did when LeBron James came into the league in 2003, there’s discussion that the one-and-done rule could be eliminated in the coming years, meaning we could just see a James-James tandem on the same team.

LeBron James‘ contract runs through 2023 — when his son, Bronny, graduates high school and could have option to enter the NBA Draft if the league and NBPA change the high school-to-pro rule. https://t.co/6bcMLgYTVV

LeBron gave himself options by extending his contract with the Lakers until 2023, and allows both him and his family to determine what might come next once there’s more clarity for both Bronny as a pro prospect and the rules about high school players entering the NBA Draft. So, from this point forward, it’s championship or bust for the four-time league MVP and the Lakers, and, in a 2.5 years, he can evaluate his next move — which, if allowed, would undoubtedly be to play with his son.

Remember, LeBron James has gone on record as saying that his biggest achievement in basketball would be to last long enough to play with Bronny in the NBA. Should it happen, the eldest James would be 39 years old entering the 2023-24 season, presumably past his prime — although he isn’t showing signs of slowing down anytime soon — and ready to hand the baton over to the next generation. Here’s what LeBron said a few years back when talking about his son Bronny.

“You want to ask me what is the greatest achievement of my life? If I’m on the same court as my son in the NBA. That would be number one in my lifetime as an NBA player. I’ve thought about it because my son is about to be 14, and he might be able to get in there a little earlier.”

When asked about the scenario last season, LeBron James scoffed at the question and laughed it off, but it’s fresh in everyone’s minds now that he’s signed his latest contract extension with the Lakers and he’s set himself up for the possibility of it happening. If it all comes together, man, how awesome would that be to see? As a hoops fan, this is something we should all hope for.