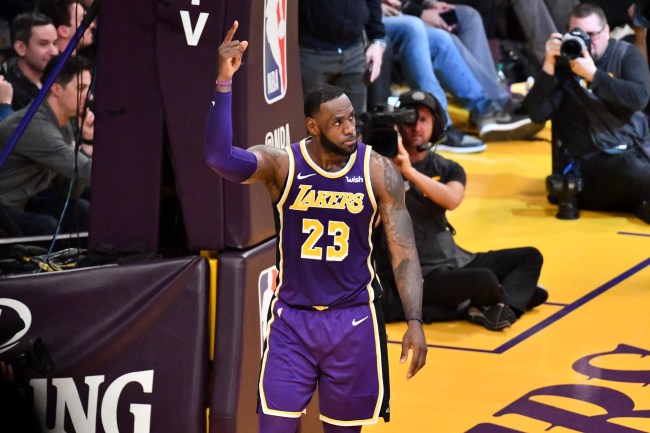 LeBron James is in his first season with the Los Angeles Lakers, but should the iconic franchise consider giving up on the experiment this summer and trade the three-time NBA champ and four-time league MVP? That’s a question that picked up some steam this weekend during the Lakers-Celtics game and has seemed to be a topic of interest by diffrent outlets.

To recap, during Saturday night’s nationally-televised broadcast, announcer Jeff Van Gundy tossed out the idea that the Lakers should actually consider dealing LeBron James — which seems absurd at first thought. That, of course, led to Van Gundy’s broadcast partner, Mark Jackson, shooting down the thought, almost seeming embarrassed that it was a topic of conversation. Here’s a look at the quick exchange.

Whether in jest, serious or just something to rile people up and cause debate, Jeff Van Gundy opened up a can of worms with this, because ESPN’s First Take ran a Twitter poll today asking if the Lakers should, in fact, trade LeBron James this offseason. The results? Well, while 53 percent did reply no, that left the other 47 percent of the more than 30,000 voters saying yes. You can see the reveal below, with hosts Stephen A. Smith and Max Kellerman rounding out the show with a couple thoughts about the trade idea.

A @FirstTake poll of more than 30k votes just showed ONLY 53% of people WOULDN’T trade LeBron James. Things aren’t good for The King in LA. 😬 pic.twitter.com/ElnB3jkAOB

Of course, the Lakers are 99.99 percent not going to trade LeBron James during the next three years that he’s committed to them. The guy is, arguably, the greatest player of his generation and has way too much power and influence on the team and league itself to ever be dealt. But that doesn’t mean the team shouldn’t at least explore the possibility if there’s a deal that makes sense.

Look, given the fact the Lakers have been the most dysfunctional NBA team this season with lots of drama — from trade rumors to James’ typical passive aggressiveness towards his young teammates — everyone’s trying to find a quick fix for them to compete again. With salary cap space this summer, the team can sign an A-level superstar like Kevin Durant, Kyrie Irving or Kawhi Leonard, or an A-minus-level guy like Klay Thompson and, boom, they’re all of a sudden back into the mix in the Western Conference playoff picture. Will that happen? Who knows.

Regardless of how this thing turns out for LeBron James and the Lakers this summer and moving forward, the fact that a) we’re even talking about the team trading James before his first season in L.A. is over is wild, b) shows how polarizing of a figure James actually is and c) proves that he might be in over his head with a Lakers team with no complementary parts around him. Wonder if he has even a little regret coming to the Los Angeles, or if he’s got faith in himself and the front office to rite the ship over the offseason; ’cause he’s not getting any younger, so the clock’s ticking.