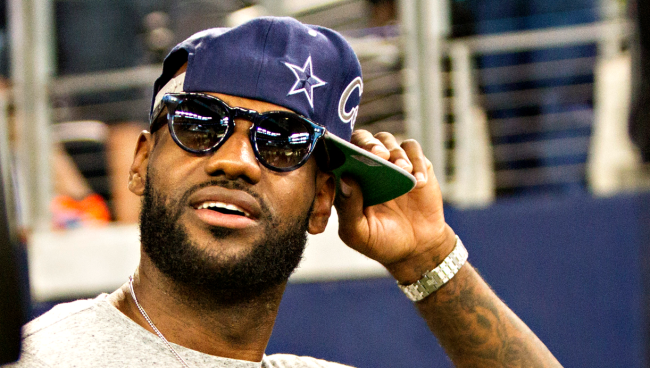 In case you missed it, LeBron James revealed on Thursday that he is no longer a Dallas Cowboys fan.

James says he stopped being a supporter of the Dallas Cowboys when the organization and its owner Jerry Jones took issue with the team’s players kneeling during the national anthem.

In 2017, Jones made it very clear that no Cowboys player was going be allowed to “disrespect the flag” by kneeling.

Then, in 2020, defensive tackle Dontari Poe was cut by the Cowboys, supposedly over being overweight. However, he also happened to be the team’s first and only player to kneel during national anthem a couple of weeks before he was cut. Many people thought that was the real reason why he was let go, something Jerry Jones refused to confirm or deny.

A few fans understood where LeBron James was coming from and appreciated his boycott of the Cowboys over the national anthem kneeling issue.

I respect that man’s opinion. Btw, “the organization” was Jerry Jones himself. I read that he something further like, ‘you’re high paid actors, but it’s still my stage.’ He did eventually do the infamous ‘ok just this once’ kneel with the team.

During the same interview James added, “I’m all in on the Browns,” then made light of the fact that Cleveland isn’t a very good football team.

That one sentence by LeBron James about rooting for the Browns set Sports Twitter on fire, for multiple reasons

(1) LeBron appears to be, and has for awhile, a very bandwagon football fan, willing to change his favorite teams on a whim.

(2) James apparently doesn’t think the Browns signing Deshaun Watson to a huge deal to be their quarterback is equal to the Cowboys (Jerry Jones) not wanting players to kneel when it comes to reasons to not support a team.

So I guess that means he supports sexual abusers now then huh?

“Morally, can’t root for the cowboys” he does know this guy plays for the browns right? pic.twitter.com/JGqK0eWcaH

(3) The fact that LeBron refused for so long to take a stand against slave labor being used in China and its suppression of Hong Kong protesters.

(4) Cowboys fans who never wanted LeBron James to be a fan of their team in the first place.

That's awesome! We won't real fans anyway. Not those who are fans when it feels good to them.