Lenny Dykstra Wants To Buy O.J. Simpson’s Heisman Trophy And Is Asking The Internet What He Should Do With It 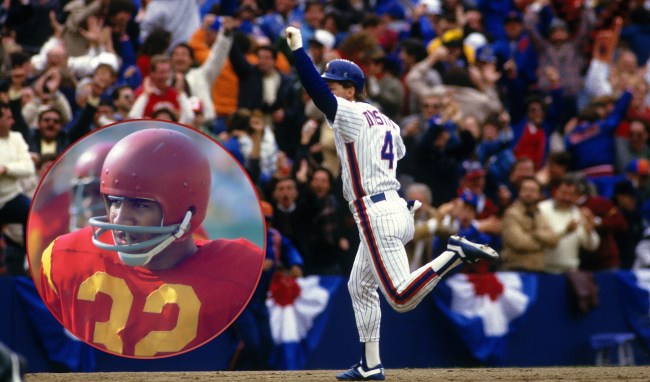 The trophy is supposedly now owned by Rick Reviglio, president and general manager of a construction wholesale supplier, who reportedly purchased the trophy in secret nearly a year ago and now keeps it in a “secure environment along with many other historically important memorabilia.”

Reviglio wrote in an email to ESPN, “I have no interest in selling the Heisman and it is my express goal to continue adding to my collection so that someday my children’s children and their children have one of the finest American sports memorabilia collections ever known. Going forward, I would request that my privacy be respected and I intend for this statement to serve as my only public comment on this matter.”

That’s not stopping Dykstra from telling his followers on Twitter that he wants to buy Simpson’s Heisman Trophy. He’s even asking the internet for help with what he should do with it if he somehow is able to achieve his goal.

“#NailsNation, if we can get the funds together to buy Orenthal’s #Heisman Trophy, what should we do with it, melted down or not?” tweeted Dykstra.

#NailsNation, if we can get the funds together to buy Orenthal’s #Heisman Trophy, what should we do with it, melted down or not? https://t.co/c2mTtQUvkO @TheRealOJ32

Allow people to piss on it for $1, and give the money to the Goldman/Brown families.

Make a latex mold of your hog and turn it into a cast, fill the cast with molten bronze from statue, send the completed sculpture to OJ, try to avoid getting murdered.

Melt it down. Make some nice teeth for yourself. Avoid dumpster diving to retrieve teeth.

That is a reference to this Five-Star story.

Dykstra also offered up a suggestion of his own.

Or should we, as someone just suggested, cut its head off? Not mentioned: after that, put cute little gloves not all the way on it?

The last time we checked in on the three-time All Star he was shooting his shot with the World Series flashers, so it’s nice to see that he’s been able to keep himself busy in retirement.

Should we raise money to buy Orenthal (aka @TheRealOJ32)’s on-the-market Heisman Trophy and charge people to go to the bathroom on it, put one small cut in its neck, etc.?

Who out there is good with setting up @gofundme accounts?