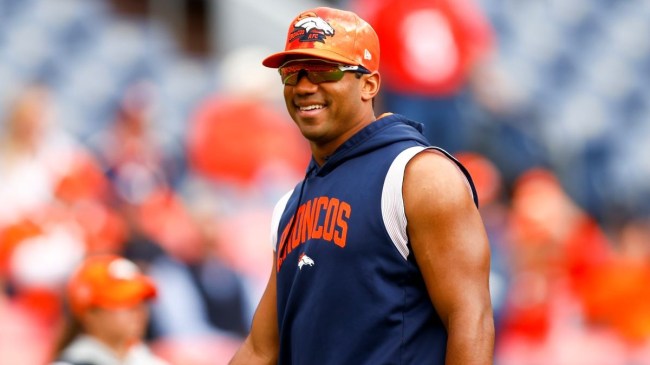 Russell Wilson’s 2022 NFL season has been a complete disaster. The nine-time Pro Bowl QB was traded from the Seattle Seahawks to the Denver Broncos in the offseason. He then inked a massive five-year extension with Denver. But the results haven’t been what either side expected.

The Broncos are currently 2-5 and sit dead last in the AFC West. Much of their struggles have come on offense and come down to Wilson. The Super Bowl-winning quarterback is averaging just 206 yards per game through the air and has thrown for five touchdowns compared to three interceptions.

Wilson’s struggles have also appeared to wear on some of his teammates. Denver wideout Jerry Jeudy was seen complaining about his QB earlier this year. And that was before a report about Wilson working out for half of the Broncos’ eight-hour plane ride to London while the rest of his teammates tried to sleep.

The Broncos are set to square off with the Jacksonville Jaguars at Wembley Stadium in London on Sunday. But before doing so, Wilson stopped by Liverpool and filmed a good luck video for Liverpool FC in their game against Leeds United on Saturday.

Wilson even noted that Liverpool was a special place for him because it’s where he and his wife Ciara got married. But ultimately, the video backfired.

The Reds lost at home 2-1. Leeds had not won a Premier League match since August prior to the contest and Liverpool boasted a lengthy record of not losing at Anfield.

Liverpool fans knew exactly where to place the blame after the final whistle blew.

This fraud jinxed us https://t.co/No6M7nMKGK

It all makes sense now https://t.co/fUlUMkA43H

Liverpool lost at home for the first time this year to a team in the relegation zone after this video was posted. Probably just a coincidence https://t.co/H9lALjOHKe

If you see Russell Wilson walking toward you anytime soon, maybe think about crossing the street.