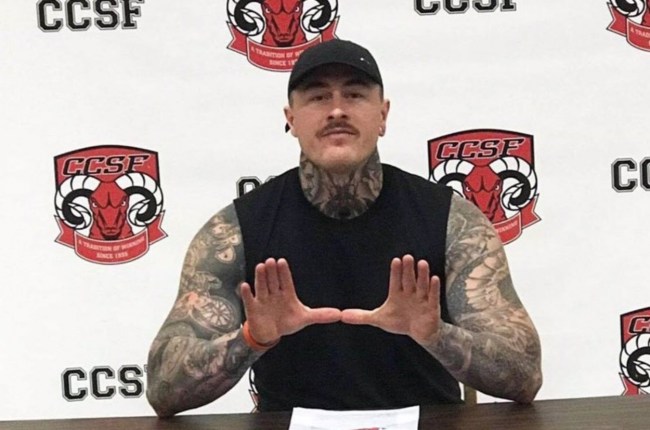 The first recruit to sign his Letter of Intent on 2019 National Signing Day was the University of Miami Hurricanes‘ new 24-year-old punter, Louis Hedley. National Signing Day doesn’t begin until February 6th, but Louis Hedley is Australian and thanks to the time zone change he was able to send in his LOI early because it’s already been February 6th in Australia for like two weeks.

My first question is: HOW is this man only 24-years-old?!? He looks like he’s old enough to be my dad, or beat up my dad, probably both.

Louis is a JUCO transfer from the City College of San Francisco. He wore the red shirt in 2018 but in 2017 he averaged 38.6 yards-per-punt. He will make an immediate impact for the Miami Hurricanes who struggled at that position last season.

The Australian punter is officially a member of #Surge19. Welcome to The U, @LouisHedley1! pic.twitter.com/hPTsDEwkhz

*probably* 55-year-old Louis Hedley has a 3-star rating from 247sports and a #1 composite ranking at his position. Getting the #1-ranked punter is a HUGE get for the Miami Hurricanes who lost punter Zach Feagles and whose punting duo last season of Feagles and Jack Spicer was so bad the team resorted to rugby-style punting.

He also boasts a 3.7 GPA so this isn’t your stereotypical jock. This man’s the complete package.

This guy. @LouisHedley1 To Miami. Those who know him understand that he has deserved every part of this. Changed his life,went to JC at CCSF and now heads to Miami with a 3.7 GPA. A scaffolder turned College student. oh and he lives Tatts. On ya Louie. @PatMcAfeeShow #punta pic.twitter.com/ERI2ELeXeR

Louis Hedley was attracted to punting after playing Aussie Rules Football back in his native Australia. Here’s an excerpt from the City College of San Francisco student newspaper about Headley after he arrived on campus:

Hedley decided to try out punting when someone who had watched him play Aussie rules football told him he had a big boot and should try punting. Before that Hedley had been playing since he was three years old and had played semi-professional for three years in Western Australia.

Hedley connected with Prokick Australia, a company that helps Aussie rules players learn to punt so they can head to America to play football. Prokick Australia has helped send multiple punters to City College, many of whom moved on to play at the Division-1 level. (via)

As an FSU fan and graduate, I can’t say that I’m looking for the first major highlight of Louis Hedley form tackling one of our players on a return and going viral because I can already imagine this happening next season.