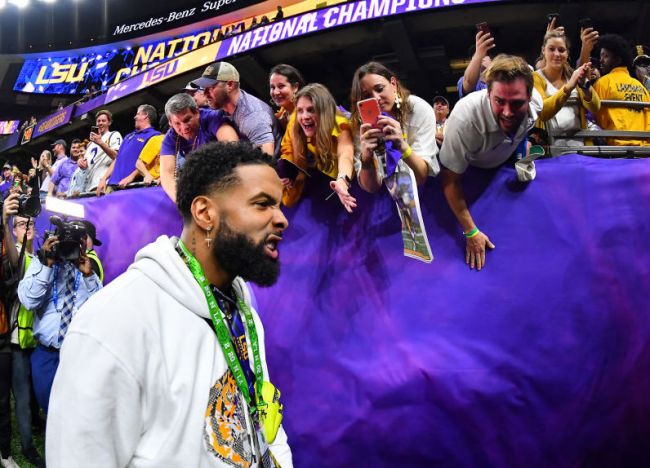 The NFL just would not be the NFL without Odell Beckham Jr. making headlines week after week whether it is for the right or wrong reasons. This week OBJ has found himself in the limelight once again for all the wrong reasons and in college football rather than the NFL. LSU is banning its former superstar from team facilities for two years after he handed out $2,000 in $100 bills to players after last year’ss national championship game in New Orleans.

The bad news does not end there for Tiger fans as Sports Illustrated reported the self-imposed sanctions and that the school is docking itself eight football scholarships over a two-year period and reducing recruiting visits, evaluations, and communication. Those measures come after a roughly two-year investigation uncovered “booster payments to the father of a football player,” per SI’s sources.

Sports Illustrated gave a detailed look into what the self-imposed restrictions for LSU will look like:

“The program will give up four scholarships in each of the next two years for a total of eight. Teams are normally allowed to have a maximum of 85 players on scholarship per year. The penalties will not impact the team’s ability to sign the maximum of 25 newcomers a year. Recruiting reductions include the elimination of 12.5% of official and unofficial visits, a 21-day reduction of the normal 168 days of allowable off-campus contacts and a six-week ban in communication with prospects.”

I feel bad for the next guy that crosses paths with LSU head coach Ed Orgeron, who we all know is a zero non-sense kind of guy. I would love nothing more than to hear a phone call from OBJ apologizing to Orgeron for screwing up his recruiting schedule. I think if Orgeron would have gotten wind of Beckham dishing out cash to his players on the field he would have knocked his lights out.

OBJ continues to stir the pot both on and off the field. It leaves you to wonder as a team if the headache is worth the tremendous talent that we all know the Browns wide receiver is.