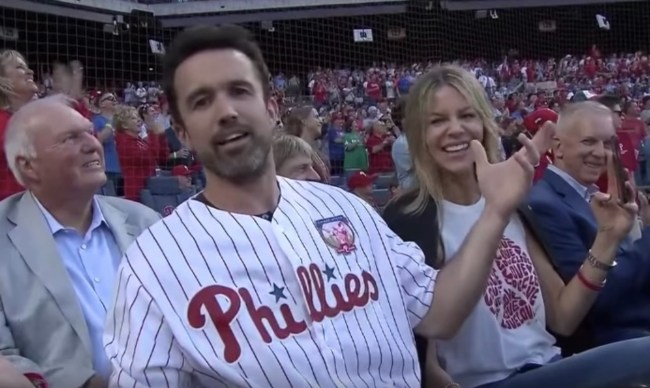 It’s been A LONG TIME since Season 5 of It’s Always Sunny in Philadelphia, specifically since the episode ‘The World Series Defense’ when Mac revealed the letter he’d written to Philadelphia Phillies legend Chase Utley. It’s been 10 years to be exact.

That letter was one of the standout moments from Season 5 and it might go down as one of the top 10 moments in It’s Always Sunny history. If you need a refresher, here’s what the letter said:

“Dear Chase, I feel like I can call you Chase because you and me are so alike. I’d like to meet you one day, it would be great to have a catch. I know I can’t throw as fast as you but I think you’d be impressed with my speed. I love your hair, you run fast. Did you have a good relationship with your father? Me neither. These are all things we can talk about and more. I know you have no been getting my letters because I know you would write back if you did. I hope you write back this time, and we can become good friends. I am sure our relationship would be a real home run!”

10-years-later, Mac finally got his wish to play catch with the power-hitting 2nd basemen Chase Utley who was a 6-time All-Star and World Series champion in 2008 when the Phillies beat the Rays. He was a 4x Silver Slugger Award winner and likely a future Hall of Famer in Cooperstown.

The Phillies held a retirement ceremony for Chase Utley on Friday night with Chase Utley throwing out the ceremonial first pitch and it was Rob McElhenney behind home plate catching the ball, a moment that was 10-years in the making for Mac. The full clip here is 20 minutes long but I’ve set the video to start at 16:48 just before Mac comes out, if the video doesn’t start there for some reason just jump ahead towards the end:

Here’s a grainier version of that without the It’s Always Sunny in Philadelphia clip that played beforehand.

I will be legitimately shocked if this footage somehow doesn’t make it into the next season of It’s Always Sunny. I have no idea how they’d incorporate the footage because Mac’s never done anything in his life worthy of throwing out the first pitch and if my memory serves me correctly he’s banned from the stadium, but I fully expect this footage to make it in next season.