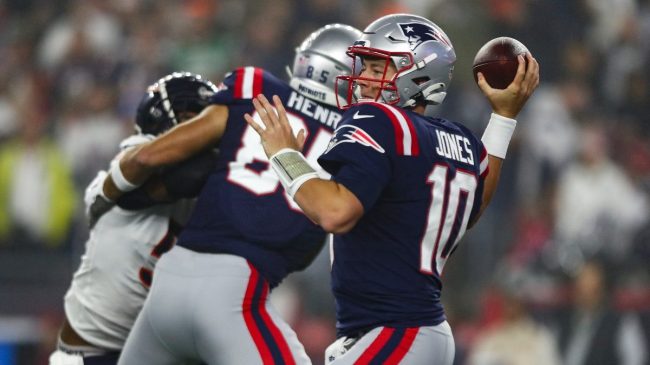 The New England Patriots got their socks rocked off by the Chicago Bears on Monday Night Football. There has been some controversy surrounding the franchise due to the quarterback situation. However, it sounds like a new video of Mac Jones’ pass has NFL conspiracy theorists buzzing.

Mike Kadlick shows a quick video of a ball Mac Jones threw in Monday night’s game. This pass supposedly is when the Patriots quarterback threw an interception before getting pulled for Bailey Zappe. As you can see in the video, the ball looks as if it hits the ESPN SkyCam wire and changes trajectory completely. Give it a watch below.

FWIW: I thought Mac was trying to throw the ball away that ended up being intercepted on Monday night.

Looks like the ESPN SkyCam changed its trajectory, and could have changed the trajectory of the #Patriots entire season… pic.twitter.com/N5kx2Lerwr

Now, ESPN finally reacts to the footage, as they deny Mac Jones’ ball of hitting the SkyCam wiring, per Ari Meirov. They state, “This pass from Mac Jones did not hit ESPN’s SkyCam wiring. This video creates a false impression, but in reality the SkyCam wire was more than 15 feet above the ball and our SkyCam system followed all NFL protocols.”

ESPN statement on this: “This pass from Mac Jones did not hit ESPN’s SkyCam wiring. This video creates a false impression, but in reality the SkyCam wire was more than 15 feet above the ball and our SkyCam system followed all NFL protocols.” https://t.co/4YmXDoXEoc

ESPN’s denial only adds to the conspiracy theory altogether. I don’t know about you, but it kind of looks like the ball hit something and changed the trajectory. Regardless, the popular sports broadcast claims Mac Jones’ ball was nowhere near the SkyCam wire. Sounds to me like we need a different camera angle to get to the bottom of this.

Even so, let’s not pretend that this is the reason why the Patriots lost to the Bears. Chicago dominated the second half and walked out of Foxborough with an impressive win. They didn’t need a conspiracy theory to help them at all. However, if the ball actually did hit the SkyCam, then Mac Jones might have been benched for all of the wrong reasons.

Considering there are SkyCams everywhere, it’s surprising that something like this hasn’t happened before. We’ll see what comes of it, but this conspiracy theory is picking up steam on social media.