Man Breaks Into Brewers’ Stadium, Tries Carving His Name Into Field With A Tractor… In Cursive 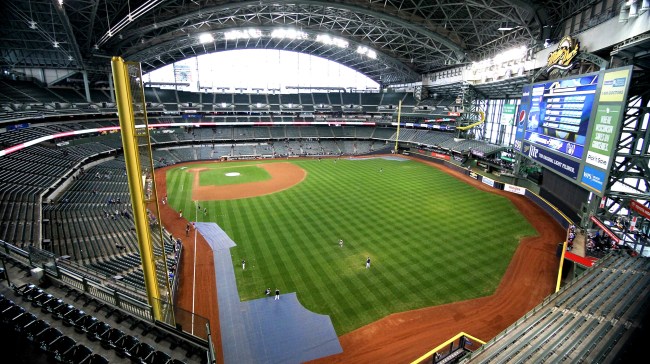 This week’s winner of the dumb criminal award comes to us from Milwaukee, Wisconsin.

Keyon A. Lambert, 40, of Cream City, was charged with a felony count of criminal damage to property and misdemeanor disorderly conduct after he broke into Miller Park, home of the Milwaukee Brewers, commandeered a tractor and tried carving his name into the turf… in cursive.

Oh, man… he flew too close to the sun and got burned.

Lambert ended up doing an estimate $40,000 in damage to the field, but by the sounds of a report by the Milwaukee Journal-Sentinel, he may have actually gotten his money’s worth.

The criminal complaint describes how Lambert entered the stadium on June 2 after finding an unlocked door and wandering to the playing field with grounds crew present. He told police he decided to commandeer the tractor because he had never driven one before and wanted to carve his name into the grass with the tires.

The tractor didn’t move fast enough for that to happen, but Lambert nevertheless drove across the field while raising and lowering the front bucket, damaging the pitcher’s mound and digging holes elsewhere on the field, according to the complaint.

Lambert told police he saw workers recording him with their phones, “so he decided to show off,” the complaint said. He also shouted various things at grounds crew workers so they would stay away from him, he told police.

“he decided to show off…” told you he tried flying too close to the sun.

Brewers statement on a break-in this morning at Miller Park. Source says the strong belief is that this is totally unrelated to recent protests in Milwaukee and around the country. pic.twitter.com/bc3Eqe8Cq0

Maybe he was just being like that guy who decided to camp out on Disney’s abandonded Discovery Island. After all, just like that attraction, the Brewers aren’t using their stadium and haven’t since October 1st so someone needed to get some use out of it.

The grounds crew has kept Miller Park ready for action in the event Major League Baseball returns to action after being shut down by the COVID-19 pandemic. Should spring training resume, the Brewers are expected to work out at Miller Park rather than return to their facility in Phoenix.

Yeaaah… that’s not going to happen. I don’t care what Trevor Bauer thinks. MLB owners and its completely inept commissioner are going to kill this whole season off.