Trevor Bauer Tells Pat McAfee MLB Is Not Being Truthful About Pay Proposals, But It Is ‘100% Coming Back’ 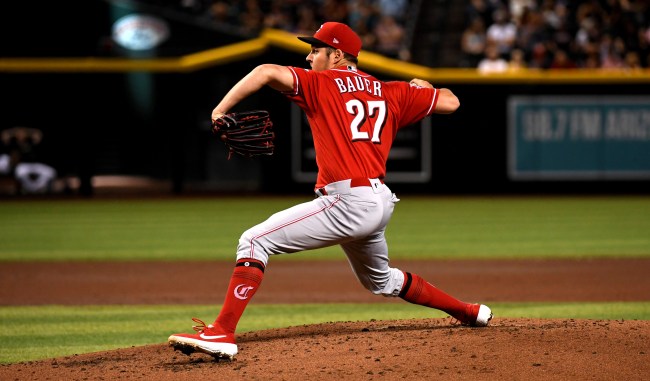 Here’s something that we really didn’t seem to have a reason to be optimistic about, but can now possibly look forward to this summer: baseball.

After hearing how some owners would prefer to just cancel the entire Major League Baseball season at this point, and with MLB submitting a ridiculous proposal to the MLB Players Association that had zero chance of being accepted (then rejecting their counter proposal), perhaps the most outspoken critic of MLB commissioner Rob Manfred and the league, Reds pitcher Trevor Bauer, says Major League Baseball is 100% coming back this summer.

During an appearance on The Pat McAfee Show on Wednesday, the All-Star righthander said, “I’m very confident that the season will be back. I’m like 95 to 100%. We have a long history of, obviously, you know,negotiating with each other as the MLBPA and MLB, but there’s been a long history of labor peace. I think we’re 26 years now? 20… since 94 depending on how you count that, that year, so 26 years now of labor peace so I’ve got to imagine there’s gonna be… it’ll be the same thing this time. We’ll get a deal worked out. No doubt in my mind about that. There’s no way there won’t be baseball this year, in my opinion.”

Bauer went on to explain why he went after power agent Scott Boras, saying he overstepped his authority by trying to tell players that aren’t his how they should handle the negotiations with MLB.

Hearing a LOT of rumors about a certain player agent meddling in MLBPA affairs. If true — and at this point, these are only rumors — I have one thing to say… Scott Boras, rep your clients however you want to, but keep your damn personal agenda out of union business.

He then went on to explain how Major League Baseball, as usual, is missing the boat, driving a wedge between fans and the players with how they are negotiating and making everything about the money.

“I don’t know any other company that would intentionally sit there and drive a wedge between their customer and their product,” said Bauer, making McAfee laugh. “It doesn’t make sense that you would try to have your customers hate your product and think that that’s good for a long-term strategy.”

McAfee and Bauer also discussed how MLB “leaked” a supposed 50/50 pay proposal to make the players look bad to fans.

It’s quite a fascinating conversation and look behind the scenes of what is currently happening between MLB and the MLBPA.