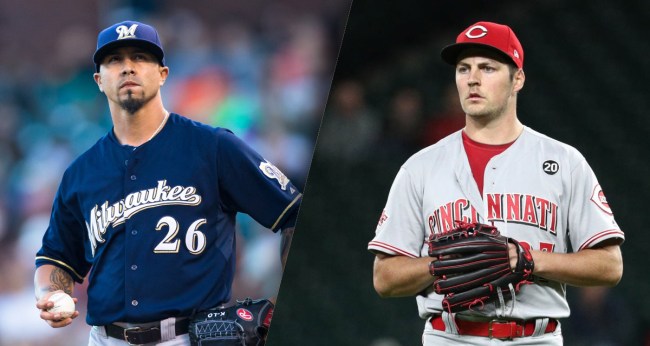 Earlier this week, as Major League Baseball and the MLB Players Association continued their thus far fruitless negotiations as far as player compensation in 2020, outspoken Cincinnati Reds pitcher Trevor Bauer ripped agent Scott Boras for what he sees as interfering in matters that don’t concern him.

On Wednesday, following Major League Baseball’s extremely one-sided proposal, Bauer tweeted, “Hearing a LOT of rumors about a certain player agent meddling in MLBPA affairs. If true — and at this point, these are only rumors — I have one thing to say… Scott Boras, rep your clients however you want to, but keep your damn personal agenda out of union business.”

Apparently that statement ruffled the feathers of former MLB pitcher Kyle Lohse because on Thursday he tweeted his displeasure with Bauer calling out Boras and things ended up getting very personal.

Lohse, who pitched for 16 seasons in the big leagues for the Twins, Reds, Phillies, Cardinals, Brewers, and Rangers, wrote in response to Bauer’s tweet, “Who do you think has helped put a system in place where you can throw balls and never have to really work a day in your life while making unreal amounts of money? Take your comments to the MLBPA if you have concerns, not twitter. Let the union do the talking. Best of luck.”

Sorry for upsetting you Kyle but if I wanted Scott boras to represent my interests and the interests of my family and many employees etc, I would ask Scott boras to do that. I don’t want him to. I want the player group through the union to do so.

Perfect. I’m not upset. Saying if you have a problem with how the union is repping you, let them know. Going public let’s the owners think you’re not unified. Fix from within, not publicly.

you do realize you’re so out of touch with what’s going on, right? but who cares.

that’s fair and happy to share at a later time. You have every right to not take me “at my word,” but I can’t explain it publicly just yet

he’s not attacking any players…

FYI.When u speak publicly against what is happening within the union, u are showing a split that the owners perceive as division amongst players. That is bad. I’ve been thru several CBA’s as a rep & I think I know a few things about this.Get back to me after youve been thru a few

And then former MLB closer Eric Gagne chimed in.

Just think... this all started with telling the guy from an experienced position, to not give the opposition ammo. But what do I know. I’m allegedly a boomer now.

@BauerOutage Back to the original point, I’ve had time to think about how this started and your use of the word agenda struck me. So I think I’ll just leave these questions here for you. Btw. I’m on the players side of this, just not your style. pic.twitter.com/JFGXzLNrsq

Imagine a world where a law degree, experience as an MLBPA attorney, having worked at other mlb agencies, and successfully becoming a certified MLB Player Agent with a client in the majors isn’t enough to avoid comments like this 🤯. so disappointing https://t.co/ipohiigNk2

Ok @KyleLohse26 2 things. You disrespected me first by judging me and making accusations. Second, it’s extremely sexist to assume that @AgentRachelLuba and I are dating. Would you assume any other player is dating their agent or are you just doing that because of her gender? pic.twitter.com/6Ms2ksTygo

That’s what you’re gonna go with? Calling me sexist? Am I wrong?Answer the questions I pasted for you truthfully. Oh, I’m sorry, forgot you don’t really “date”.

Ok Trevor, (your DMs are off)I’ve thought about it. Here’s what is going to happen. You’re going to apologize for wrongly calling me a sexist & delete your tweet. I know I wasn’t lying or falsely assuming. Then we can both go our own ways. Or I could keep going. Your call.

Well then. We may not have a MLB season in 2020, but we certainly can’t say they aren’t still giving us some riveting drama to watch.