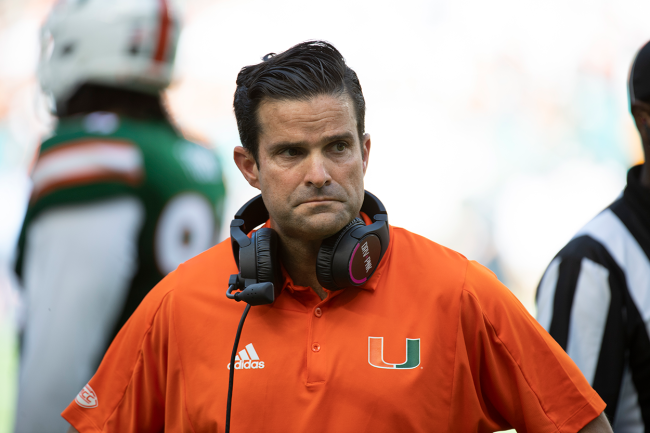 Manny Diaz was left out to dry by the University of Miami and does not feel good about it. The 47-year-old former head coach of the Hurricanes football program was fired on Monday morning and is currently unemployed.

Diaz, who took over as head coach in 2019, went 21-15 in three years. While that might not seem horrible in the grand scheme of things, he also lost two bowl games. And the last two seasons have come with expectations to compete for the National Championship.

Thus, when the 2021 season came to a close, a large calling came to have him fired.

However, before the program made a decision on its head coach, it fired its athletic director. Typically, one leads to the other, and that’s exactly what ended up happening.

It just unfolded terribly for Diaz.

Reports began to circle that Miami was expected to let him go and that it was going to hire either Lane Kiffin or Mario Cristobal. And then reports came out that it Diaz was going to be retained. That was only the beginning.

From there, the back-and-forth continued until an official offer was made to Cristobal. There was only one problem— Diaz was still the head coach.

Stuck in a bizarre limbo, Miami made a decision. It could have played out in one of two ways.

It was a remarkably uncomfortable position for Diaz, who has been with the program since 2016. And then, of course, the first option ended up happening.

Diaz was fired, Cristobal was hired.

In turn, Diaz will get paid $8 million not to coach at Miami. Fired football coach is a great gig if you can get it.

That didn’t change how Diaz was treated and he is upset with how everything went down. He released a statement on Monday afternoon and expressed his frustration.

Although Diaz’s reaction is subdue for the sake of publicity, he is likely fuming. Except, at the same time, he is getting more than 185 times the average annual salary of United States citizens to be unemployed, so how mad can he be? Perhaps embarrassed is a better word?

If it were me, I’m taking my money, getting out of there and staying AS FAR AWAY AS POSSIBLE from that program after how they treated him.