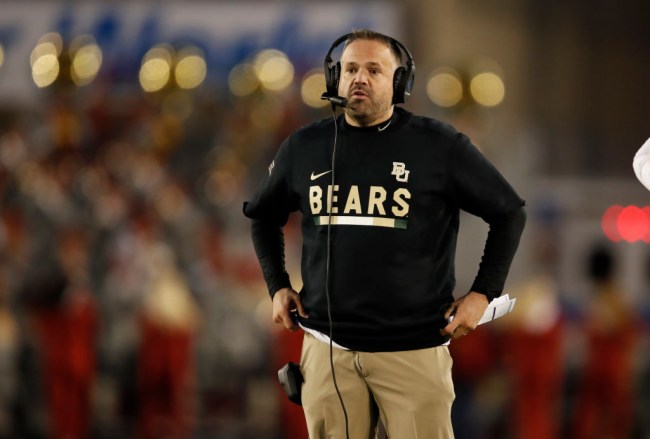 Matt Rhule’s name has been a popular one around the NFL head coaching rumor mill for a few seasons now and with the news of the Giants parting ways with Pat Shurmur on Monday, he’s being linked as a legitimate candidate.

NFL Network’s Ian Rapoport has reported that Rhule is a ‘hot candidate’ that has interest from the Panthers and Cowboys as well, but points out that New York is ‘absolutely attractive’ for him.

Matt Rhule is a hot candidate and has interest from the #Giants, #Panthers and almost certainly #Cowboys. NYG is absolutely attractive to him. https://t.co/xMhCCYbaxe

As Fox Sports’ Peter Schrager points out, Rhule and general manager Dave Gettleman worked together back in 2012 with the Giants when he was the assistant offensive line coach. That one season on Tom Coughlin’s staff is Rhule’s only experience on an NFL coaching staff.

Rhule recently joined Adam Schefter’s podcast and Schefter brought up the possibility of Rhule possibly turning to the NFL as early as the 2020 season and the 44-year-old didn’t completely shut down the idea.

“I don’t think I’m dumb enough or naive enough to say that I would never be an NFL coach. I just think for me I have such an unbelievable situation here that it would have to be next to perfect, and even then it would be hard for me to do.”

It’s hard to say the Giants coaching vacancy is ‘an unbelievable situation’ as Rhule describes, but there are certainly worse franchises to join as a first-year head coach in the NFL.

After taking over a Baylor program in disarray in 2017 and going 1-11, Rhule has gone 18-8 over the last two seasons and is getting set to take on Georgia in the Allstate Sugar Bowl this week after the Bears went 11-2 this season.