Matthew Stafford Shares Thought Process Behind Trade To Rams: ‘I Wanted To Shoot My Shot’ 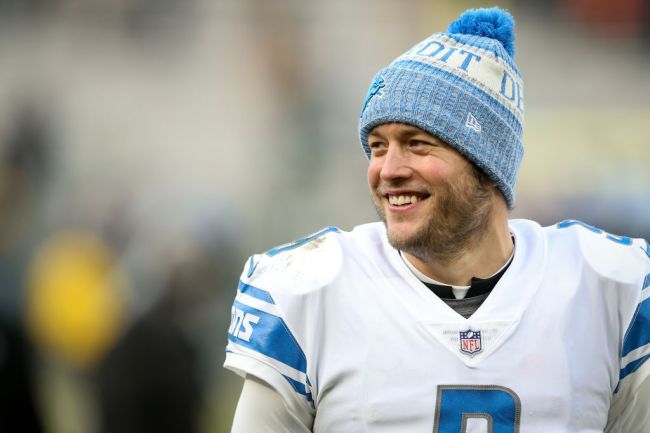 Matthew Stafford was incredibly productive during his 12 seasons with the Detroit Lions. Stafford is widely considered to be the most underappreciated quarterback in the NFL all while owning every Lions’ passing record. Having been named to just one Pro Bowl during his career backs up the idea that he’s overlooked by most outside of Detroit. The fact he’s never won a playoff game doesn’t help his cause either in terms of public perception.

Now the former first-overall pick is going to get a shot to prove any doubters wrong after being dealt to the Los Angeles Rams who bolster a roster ready that’s ready to win now just a few seasons removed from a Super Bowl appearance.

Stafford recently spoke with Mitch Albom of the Detroit Free Press and detailed the thought process about wanting out of Detroit. While he said he “never thought I would ever finish my career anywhere else,” Stafford explained that a possible move was on his mind prior to the start of last season.

“To be honest, Kelly and I probably started talking about it before last season,” he said. “It was one of those things where, you know, we were hoping that, golly, let’s go, I hope this thing takes off and we play great. But if it doesn’t, you just knew what was going to happen. They were going to tear it down and rebuild.

“And anytime you switch GMs and a head coach, you know that they’re going to want to bring their own people in, and that’s going to take time. And I, frankly, didn’t feel like I was the appropriate person to oversee that time.”

While he seems to still have plenty left in the tank, Stafford isn’t getting any younger, and spending another two to three years in Detroit through another rebuild would’ve been tough to experience. He’s got his sights set on playing meaningful football games with the Rams.

“I’ve always wanted to play in those big games, I feel like I will excel in those situations,” he said. “I wanted to shoot my shot.”

Putting up monster numbers but rarely playing in a meaningful game for 12 years in Detroit and playing for a handful of different coaches has to weigh on a guy, but now, if all goes to plan, Stafford will have the opportunity to go out and win big-time games immediately with the Rams.