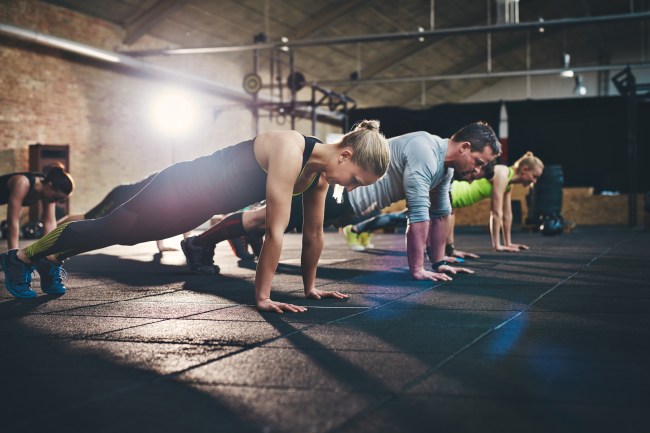 George Hood is a 61-year-old former DEA special agent who underwent Marine Corps officer training back in his 20s and who has a history of achieving outrageous physical feats. He recently made global headlines but setting a new Guinness World Record for the ‘Longest Plank‘ ever held at 8 hours, 15 minutes, and 15 seconds.

I featured George’s story here on BroBible about a week ago when he set the new world record for ‘longest plank’ ever held. Leading up to this world record-setting feat, he trained for roughly 7 hours per day. He’d attempted to set the ‘longest plank‘ world record before but fell short of Mao Weidong’s record of 8 hours, 1 minute, and 1 second until this latest attempt.

Leading up to this he was holding the plank pose for 4-to-5 hours each day followed by a workout that would cripple most people:

He said he completed a total of around 2,100 hours of planking leading up to this but it’s the mental aspect of his training that has me intrigued. When I go out for a run I often run the first 1-2 miles nonstop without taking a walk break and then after that I’m walking-running-jogging for the rest of the time because I have some sort of mental block that prevents me from just going full out.

For this ‘longest plank’ world record, George Hood worked enlisted the help of Mindset Coaching and worked with Renae Cobley to help him get his mind right. The pain is going to be there no matter what. He cannot ignore the pain just like an ultra-marathon runner can’t block it out. But he was able to get past the self-doubt by using this tactic taught to him by mindset coach Renae Cobley: self visualization.

By teaching Hood this self visualization tactic, Renae Cobley was able to successfully guide him to this 8+ hour world record:

“Cleaning up people’s mindset is a must,” Cobley tells CNBC Make It, “as every human invents themselves through a figment of their imagination and their thinking.”

During training, Hood (who is based in Chicago) would call Cobley (who’s based in Australia) after long practice planks. For an hour or two they would discuss Hood’s thoughts and any barriers he ran into. Hood, for example, often struggled with thoughts of quitting as the pain from planking intensified.

One technique Cobley used with Hood both in training and during the competition was having him visualize that he was a tree and that his roots run deep through earth.

“A tree that has deep roots can outlast almost any condition — ferocious storms, extreme heat and cold and the sheer brutality of life and its obstacles,” Cobley says.

The visualization helped to distract Hood from his own thoughts, even as his elbows began to bleed four hours into his record-breaking plank,﻿ and to “dissociate any awareness of time,” which Cobley says is key in a timed competition. (via CNBC)

I find this to be kind of a funny visualization for me since I’ve grown up in Florida and have witnessed more than a handful of trees just disappear during a hurricane but I 100% get the power of this tactic. Now, I just wish I could find a similar visualization that would work for me with running outside.

The CNBC article also takes an interesting look at his nutrition for this Guinness World Record ‘longest plank’ feat. During the 8+ hour record-setting plank his heart rate monitor told him he burned 4,252 calories. Prior to the record attempt, he only ate “a half-cup of oatmeal, one egg and lots of water”. He credits Spirulina as a big energy-boosting food for him but you can click here to read all about his nutrition if you’re interested.