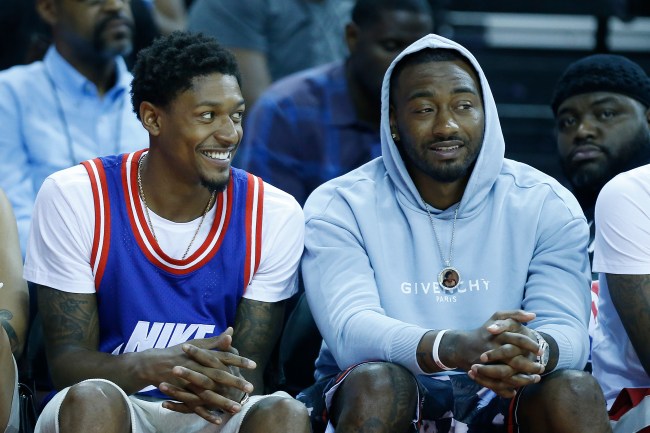 The Miami Heat already had one Big Three group about a decade ago consisting of LeBron James, Dwyane Wade and Chris Bosh, and, according to reports, the South Beach team may be looking to make a similar splash this summer to keep the whacky NBA offseason going strong. That’s because, per ESPN’s Frank Isola, the Heat are considering trading for both Bradley Beal and John Wall from the Washington Wizards.

While rumors have been flying about the Miami Heat being involved in getting more talent — with names like Russell Westbrook and Chris Paul being tossed around previously — they might be able to land the talented DC duo to join forces with recently signed free agent Jimmy Butler. Of course, that’s all dependent on what the Wizards want to do, which, according to The Miami Herald‘s Barry Jackson, is to try and extend Beal’s contract later this month and hope to keep he and his backcourt mate together in the nation’s capital.

Next significant event for Heat could be re-engaging with Wizards if Beal rejects three year, 111 M extension he's eligible to sign after July 26. For now, Wizards have rejected all trade overtures on Beal, a potential 2021 free agent

While that may be the current hope of the Wizards, it doesn’t mean that the Miami Heat aren’t thinking about ways to get both Beal and Wall — with the latter having one of the most extreme contracts in all of sports right now, with the All-Star guard set to earn $171 million over the next four years as part of a recent extension he signed prior to his injury last season. Any deal between Miami and Washington would be contingent on the Heat taking on Wall’s massive deal, which Isola briefly mentioned on Pardon the Interruption recently.

As Isola mentioned on PTI, Bradley Beal reportedly isn’t interested in signing the three-year, $111 million extension he’s eligible for this summer, which may force the Wizards into trading the sharpshooter elsewhere. While the team has been hesitant to engage in any trade talks (for now) because of the soon-to-be extension date coming up, should Beal not re-sign, it might trigger a move that could involve both he and Wall.

In an NBA offseason that has seen superstars move all over the place and the balance of power seemingly shift, should the Miami Heat land two All-Stars in their prime — albeit with one, Wall, coming off injury — it would only add to the craziness that’s been this summer. Who knows if this deal gets done or not, but the fact that Miami’s reportedly willing to absorb John Wall’s hefty contract might mean that something happens here in the next few weeks. Welcome to the new NBA: where anything can happen.