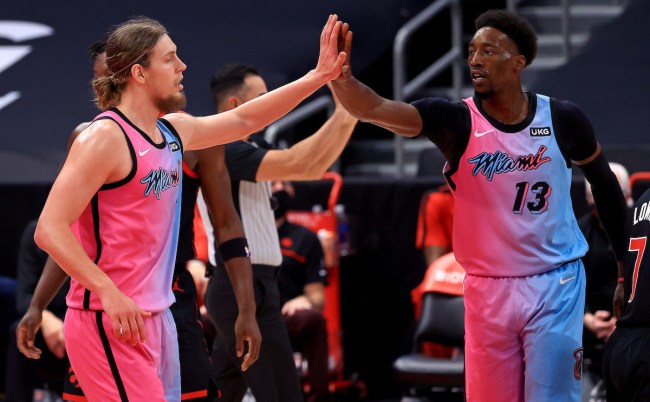 The Miami Heat have a genius idea that every single public place needs to incorporate in the battle against this ongoing pandemic: COVID-sniffing dogs that detect the virus on people. Now, as wild as this might sound, imagine life getting back to normal again thanks to man’s best friend detecting the virus on somebody prior to walking into a place like a restaurant, bar, airport, music venue, or, you know, an NBA arena. Yeah, that’s pretty epic.

According to the Sun-Sentinel, the Heat plan to allow fewer than 2,000 fans into games for the first time this NBA season, with the contest against the L.A. Clippers on January 28 being the first to have real-life human beings watching from onsite. That’s huge news, especially considering we’re far from out of the weeks of this pandemic.

So how will the Miami Heat COVID-sniffing dogs thing actually work? Take a look below at the strategy that will, hopefully, go smoothly to allow fans back into the arena.

The team’s website also outlined specific protocols and changes that fans can expect when entering the arena this NBA season, which are all in line with the NBA health and safety rules pertaining to COVID-19. And while only a limited number of spectators will be able to watch the Miami Heat in person, the fact that this is a thing has to get every basketball fan pumped out.

Assuming this strategy works and these COVID-sniffing dogs are actually capable of detecting this virus on people before they enter an arena, could we see this idea at other major events in the short-term? Like, would NCAA consider doing something like this to allow March Madness to have fans in the stands? I really, really hope so, even with the whole bubble idea it currently has planned.

The Heat plan to roll out this new plan slowly, with season-ticket holders being offered the option to attend six individual games between January 28 and February 9. If all goes smoothly, one would imagine more games become available, and, just maybe, other events implement the same idea by having COVID-sniffing dogs do the dirty work so we can live a little closer to normal again.