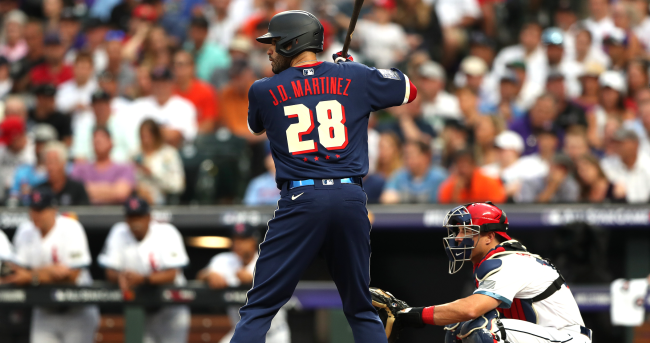 One of the neat extras that took place in the 2021 Major League Baseball All-Star team was the fact that throughout the game several of the All-Stars were mic’d up during the contest. Fernando Tatis, Jr., Freddie Freeman, Ozzie Albies and other stars were able to talk about what was going on in the game and on the field as it was happening.

Boston’s J.D. Martinez was among that group of players that were mic’d up at the All-Star Game and at one point was caught talking about how New York Yankees ace Gerrit Cole ignored all of the Red Sox on the team.

At some point during the festivities, Martinez was caught on camera telling Toronto Blue Jays stars Teoscar Hernandez and Vladimir Guerrero, Jr. about how his teammates Xander Bogaerts and Rafael Devers tried to be friendly and say hello to Cole on the team bus, but Cole just walked past them and ignored their friendly gesture.

“Gerrit Cole got on the bus and me, Bogaerts and Devers say, “Hey, how are you?” Martinez shared, then comical demonstrated how Cole proceeded to ignore them.

JD Martinez tells a group of fellow All Stars that Gerrit Cole ignored the Red Sox players who said hello to him on the bus pic.twitter.com/AB7JQVtWU0

Apparently, Gerrit Cole was trying to do his best Bob Gibson, who famously hated the MLB All-Star Game because he was forced into fraternizing with players he considered to be the enemy.

It would be interesting to know if Cole did that to all of his All-Star Game teammates or just the Red Sox representatives.

Meanwhile, players like Tatis, Freeman, Albies, Bogaerts, Kris Bryant, Nelson Cruz, and Liam Hendricks were also mic’d up during the game and they appeared to be fine with their All-Star Game brethren.

During batting practice, Jesse Winker of the Cincinnati Reds, Vlad and Manny Machado of the San Diego Padres were also mic’d up.

Shohei Ohtani and Juan Soto were mic’d up for their epic matchup during the Home Run Derby.

White Sox star Tim Anderson, who somehow didn’t get into the game, was mic’d up for other events during the week as well.