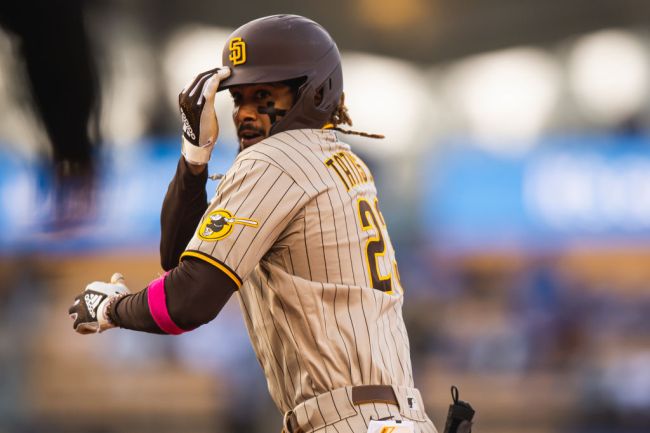 Fernando Tatís Jr. is everything that is good about the game of baseball. The 22-year-old superstar made a FORTUNE in the offseason and he plays fast, hard and loud. That third component of his play was on full display this weekend as the Dodgers and Padres squared off for the sixth time this season. Both teams are division rivals, but San Diego has been extremely underwhelming in the past decade, so it hasn’t been particularly heated in recent years.

However, now that the youthful team from “America’s Finest City” has arrived, things are getting interesting again. The tone was set with one of the crazier games you will ever see in their first meeting of the 2021 season and the pace has not slowed down.

Although Tatís was only three months old when his father hit two grand slams in the same inning at Dodger Stadium in 1999, he was fully aware that the Padres happened to be in the same ballpark on Friday, exactly 22 years later. In homage to the Sr. Tatís, perhaps, his son went yard twice in the same game to blow open a 6-1 win.

The Padres took Game 2 of the four-game series and took a 3-2 advantage on the year. But Tatís Jr. wasn’t done there. As the two teams took the diamond on Saturday, the El Niño picked up right where he left off. Trevor Bauer was on the mound for the Dodgers and he left an 85mph cutter over the middle of the plate with his second pitch of the evening. Tatís was hitting leadoff and took the 0-1 offering deep to left field.

As he was rounding the bases, he covered one eye, trolling Bauer for his earlier Spring Training antics.

Anything you can do, eye can do better. pic.twitter.com/LzXWzzI0Ak

During a preseason game on March 6th, Bauer recorded a strikeout against San Diego with one of his eyes closed. Tatís mocked the move on Saturday.

Trevor Bauer struck somebody out with a nasty slider and ONE EYE CLOSED.pic.twitter.com/QKjqW4Y0tr

Four innings later, with the game tied at two and Bauer still in the game, the youngster went yard again for his fourth dinger in two days. He was met with resounding boos as he pimped the home run and made sure that everybody in the stadium knew what was up.

As he crossed home plate, Tatís mocked Bauer’s signature K strut and hit the McGregor walk. It was savage.

In case you needed another look 😉@Padres | @tatis_jr | @TheNotoriousMMA pic.twitter.com/NLEpQbLKj4

Los Angeles went on to win the game and even the series at 3-3, but Tatís’ antics stole the headlines. Bauer was asked about the comments and he was all for it. As he should be. It’s great for baseball.

"I'm all for it. I think it's important that the game moves in that direction and we stop throwing at people because they celebrated having some success on the field." @BauerOutage on Fernando Tatis Jr.'s celebrations. pic.twitter.com/RdLMAWhQVD

The seventh meeting between the two teams comes on Sunday Night Baseball, and it is sure to bring the fireworks.